Have a UK passport? As Britain breaks ties with the EU, Muffin Break’s teas are free for you. That is, Muffin Break is inviting British citizens to “take stock” with a free pot of Earl Grey or English Breakfast Tea today (1 July 2016) at stores nationwide.

The company says: “In light of the unsettling week following the United Kingdom’s decision to leave the European Union, Muffin Break today announces a nationwide tea exchange to offer British expats a place to reflect on the events of the past seven days.”

Muffin Break marketing manager Gemma Fitzsimmons, who is British, said in a statement: “There is an air of uncertainty for everyone and particularly the Brit community following Brexit. A comforting Friday cuppa tea is the perfect vehicle to ponder and discuss events with friends and family.”

The promotion is also being championed by the company’s British franchisees. Jacqui and Nikki, store owners at Muffin Break Whitford and Karrinyup in Western Australia, are self-confessed tea lovers and believe in the power of tea to bring people together.

“Back home we always put the kettle on when we have something on our minds. A discussion over a brew can be just the ticket to gain clarity and a different perspective,” Jacqui says.

The promotion runs from 8am to 5pm on Friday 1 July. A British driving license or current British passport must be presented. 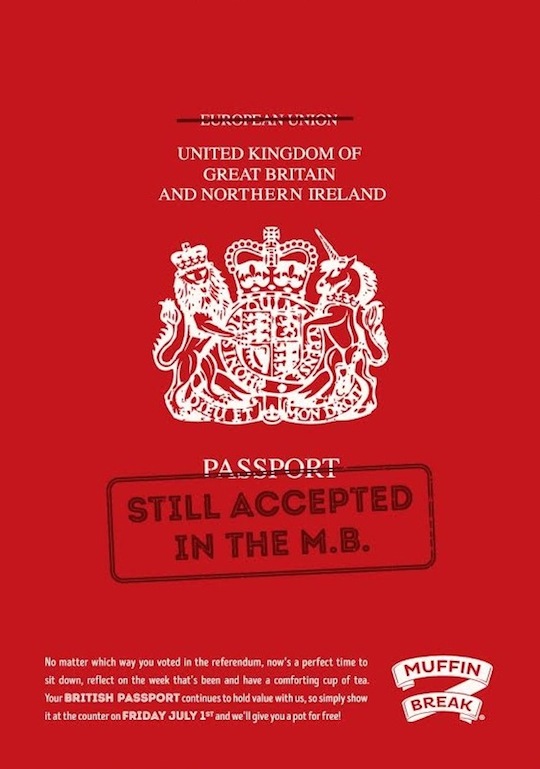