Myer has launched its ‘Where Christmas comes for Christmas’ campaign for the festive season.

Myer and Clemmenger BBDO have launched the ‘Where Christmas comes for Christmas’ festive campaign via a 90 second animated film.

The CGI short has been created with Aardman, the animation studio used for Wallace and Gromit and Shaun the Sheep.

To accompany the launch, Myer is releasing The Story of Santa’s Star, a free interactive Christmas storybook which features games and puzzles for kids. 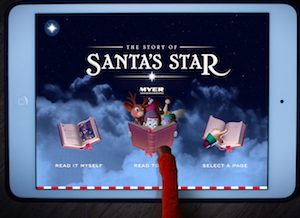 “Our aim was to bring the characters to life beyond film. So alongside our storybook you’ll see them throughout Myer stores, Myer’s owned channels and in a range of limited edition merchandise,” says Clemenger BBDO Melbourne creative director Evan Roberts of the animated short’s characters Angel, Elf, Mouse and Reindeer.

Previous Article
The biggest year ever for brand acquisitions
Next Article
Never doubt your identity: how to monitor a brand in the online world