Social TV companion app Zeebox has launched in Australia today, hoping to become the ‘sidekick’ to Australian TV viewers and allowing brands and networks to engage an audience on the second screen.

The app is available on iPhone, iPad, Android devices and through the Zeebox website, and has so far launched in the UK and US. Users can browse program guides, see what is popular, set up viewing reminders and schedule appointments with friends.

Developed by former BBC iPlayer CTO Anthony Rose and former EMI executive Ernesto Schmitt the app is independent from any one particular network, although it so far has a partnership with Network Ten.

Craig Blair, CEO of Zeebox Australia, says the app also allows TV networks to share content with users such as trivia, chat and statistics, and provides opportunities for brands to integrate second-screen advertising and ecommerce functionality, to facilitate purchase of products seen on screen, for example.

“Zeebox knows what’s happening on the show you’re watching and opens up that world to you. With search, recommendations, social connectivity and ecommerce functions all built into the one app, it will be Australian’s first truly integrated second-screen experience, making TV even better.”

Zeebox’s technology monitors the closed-captioning system to pull out words mentioned on screen, as well as names of actors and other program information  into a stream of ‘Zeetags’, which, when clicked, pull up information from the web such as a Wikipedia page for that topic. Blair explained to Marketing late last month that Zeetags will be made available to brands looking to capitalise on a particular topic, allowing advertisers to appear when a user clicks through to find out more information on that topic. 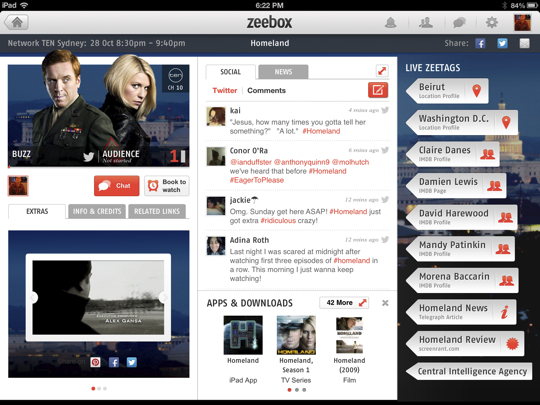 While watching TV shows, viewers can interact with other members of the audience by chatting with friends or on social networks. The app automatically pulls in Twitter mentions of the shows, although shows with vague titles can suffer slightly inaccurate and irrelevant  tweets, as any mention of Al Jazeera, anywhere in the world, will appear when the Al Jazeera News program is on air, for example, and the stream for Nine’s children’s program Surprises showed any tweets with the hashtag #surprises when we checked out the app this afternoon.