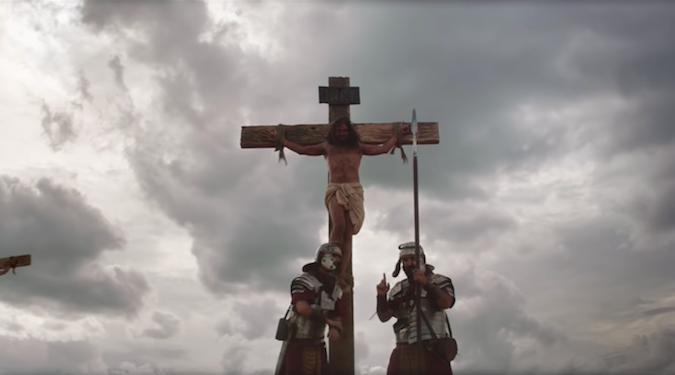 The internet is divided over an ad from donation advocacy group Dying To Live, which sees Jesus agree to donate his organs while dying on the cross.

The two-and-a-half minute spot is part of a larger film premiering in cinemas later this month, Dying To Live, encouraging Australians to sign up to become organ donors.

The spot sees two Roman guards convincing Jesus to sign up for organ donation while he is dying on the cross, “Not all of us are going to the eternal paradise and your organs could save up to six people – seven people.”

“Isn’t it on my license?” asks Jesus.

“It used to be, now you gotta go online, but it’s very simple,” replies one of the guards.

Unsurprisingly, the spot has audience members divided. “Im[sic] not a christian but this is the most stupid ad I have ever seen. I will never donate my organs because of this ad,” comments one on social media.

Another threatens to make a complaint over the ad, “To be so casual about Jesus’ crucifixion is taking humour denigrating Christ to a new low. If your aim was to divide opinion over the level of respect Jesus Christ and Christians should be given, you have suceeded[sic].

“I will not be sharing this video with anyone, but I WILL be making a complaint.”

Islamic community figure Keysar Trad told The Daily Telegraph that the ad “showed irreverence towards venerated figures,” indicating that the spot is likely to cause offence to some Muslim and Christian viewers.

Richard Todd, the filmmaker responsible for Dying To Live, is no stranger to public scrutiny. In 2015 Todd sparked national debate over coal seam gas with his film, Frackman. In a similar approach, Todd will be looking to divert discourse toward organ donation in the same controversial manner.

“We, the Australian public, have it in our power to go from one of the lesser-performing transplant countries in the developed world to one of the best,” says Todd.

“What a wonderful Christmas present for Australians on the transplant list whose lives are often defined by uncertainty, pain and deteriorating quality.”

Anglican Bishop of South Sydney Michael Stead admitted that though some “might be offended by the Monty Python-esque humour,” the commercial was ultimately communicating an important message.