The MADC has released comical parodies of the TAC’s ‘Meet Graham’ 2016 campaign and Metro Melbourne’s ‘Dumb Ways to Die’ 2012 campaign.

To promote its upcoming awards show, the Melbourne Advertising and Design Club (MADC) enlisted the help of Cummins&Partners to create a spoof of the decorated TAC campaign: presenting ‘Grant’, “the only person designed to survive a career in advertising.”

The TAC’s ‘Meet Graham’ via Clemenger Melbourne in 2016 made waves among marketers and advertisers. Highlighting the dangers of vehicular accidents with a model of what humans would have to look like to be entirely safe on our roads.

The spot pokes fun at the unreasonable hours, copious amounts of alcohol and frequent capitulation required to survive in the advertising industry.

Describing Grant’s features, the spot explains that the model is equipped with “smaller than average genitals, giving him something to compensate for; a completely removable spine for client meetings; and, of course, Grant is a white male.”

MADC president Adrian Bosich comments, “The MADC Stars are a celebration of Melbourne’s originality and creativity. While the new night will showcase the best Melbourne work of the year, the tone will have a relaxed, casual atmosphere.”

In addition to the spot directed by Armand de Saint-Salvy, Thirteen & Co also created a spoof of the Canne’s winning 2012 ‘Dumb Ways to Die’ campaign from Metro Melbourne. 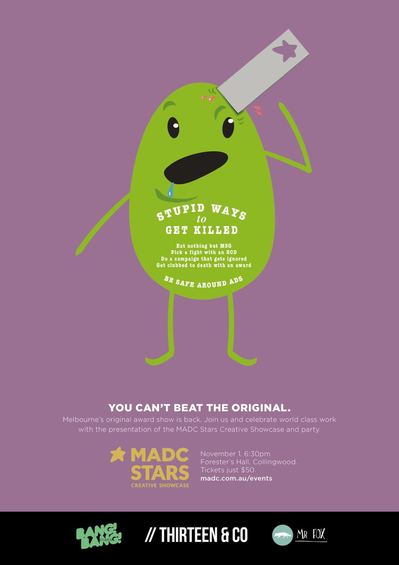