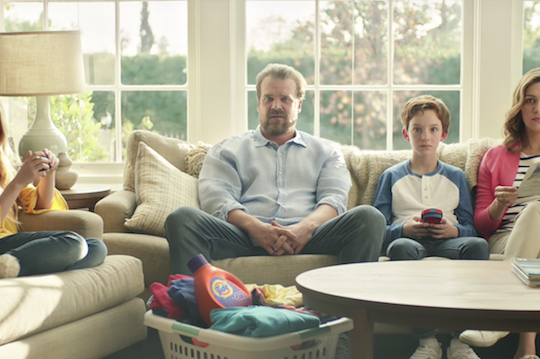 It’s the biggest day of the TV advertising calendar. Over 100 million viewers watch the broadcast, with more around the world. Good Super Bowl ads achieve pop culture icon status. Bad ones are forgotten, the only memory being the painful price-tag. A 30-second spot during this year’s NBC broadcast is cost an average of US$5 million, Sports Illustrated reports.

Our faves? Probably Tide’s ‘It’s a Tide Ad’ as well as a surprise entrant from a big name Australian. Choose for yourself below!

Humanity’s sealed in a giant dome where everything’s perfect and everything else perfect has been included inside, even avocados. But unfortunately, the chips were left just outside the dome.

No appearances (so far) of the usual clydesdales in this year’s Budweiser ad, instead this year the brand focused on its clean water project. Since 1988, Budweiser has sent cans of clean water to cities across the US that were impacted by natural disasters.

The Bud Knight rides in and saves the day in a medieval battle scene.

Coca-Cola’s ad celebrates diversity, showcasing the billions of different people of the earth, saying there’s a type of Coke for everyone.

The online investments platform’s ‘This is getting old’ ad features elderly Americans still in the workplace – leveraging a key trend in the US – over one in three Americans have no retirement savings.

The air freshener spray brand’s TVC tells the story of Dave, a man whose ‘bleep don’t stink’, and ends ‘Dave isn’t at your Super Bowl party, but everyone else is. Is your bathroom ready?’

Jack in the Box

The fast-food chain’s mascot faces off with Martha Stewart.

Aerosmith frontman Steve Tyler turns back the clock in ‘Feel Something Again.’

The TVC features Chadwick Boseman in character as Marvel superhero Black Panther. The Black Panther film will be released this year.

Regular M&M character ‘Red’ wishes he could be human so people try to stop trying to eat him. His wish is granted and his human form is played by Danny DeVito.

The US beer brand’s ad stars actor Chris Pratt preparing for his role in its Super Bowl commercial.

People for the Ethical Treatment of Animals’ (PETA) commercial pulls no punches. It tells the story of a meat and livestock industry executive confessing his sins – lying about the industry’s treatment of livestock. It stars vegan actor James Cromwell and delivers the call-to-action ‘go vegan’.

The ‘Wow’ commercial stars Bill Hader and encourages customers to stack and combine various Pringles flavours to make new ones.

The pick-up truck brand’s ad is a modern take on the country hit ‘Thank God I’m a Country Boy.’

Another ad focusing on clean water projects, this one featuring Matt Damon. By purchasing a special edition beer chalice, customers help provide clean water to developing communities around the world, through a donation to Water.org (founded by Damon).

Disney released a teaser for the franchise’s latest instalment Solo.

A lab employee is mocked by his workplace full of robots for paying too much for his phone and data plan.

The website building platform’s ad stars Keanu Reeves standing up, riding a motorcycle through the desert, and that’s about it.

What starts out as something that appears to be a trailer for a new Crocodile Dundee film starring Danny McBride and Chris Hemsworth is revealed to be a tourism ad for Australia.

The car and truck accessory manufacturer celebrates US industry. ‘We built our factory right here in America. Isn’t that the way it’s supposed to be?’ questions the ad.

This year, the fast-food chain is taking on McDonald’s head-on.

Previous Article
Amazon overtakes Google and Apple as world’s most valuable brand
Next Article
Thinking about expansion? Avoid these mistakes