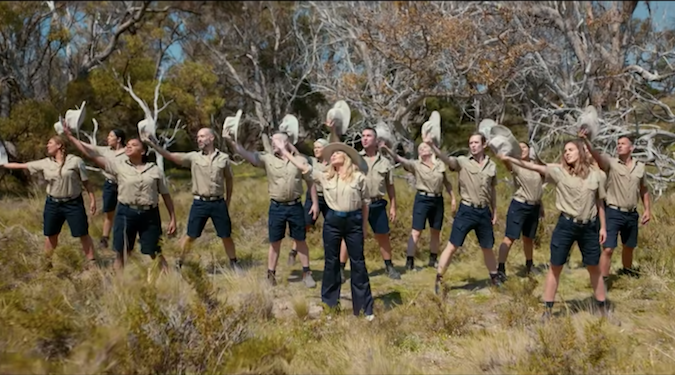 Tourism Australia has placed a temporary hold on its new ‘Matesong’ campaign in the UK, amid Australia’s bushfire crisis.

The new ad – an extension of the ‘Philausophy’ brand platform – debuted in the UK just prior to the Queen’s annual Christmas address on ITV. Led by Australian pop icon Kylie Minogue and featuring a swathe of big Australian names including Ian Thorpe, Adam Hills and Shane Warne, the ‘Matesong’ spot and its surrounding collateral are being pulled from UK media, according to reports.

The ‘Matesong’ campaign reportedly cost Tourism Australia (TA) a total of $15 million, the largest Australian tourism investment made in the UK in more than a decade.

TA has confirmed it will reduce some of its campaign activity in the UK in response to the bushfires.

“The number one priority right now continues to be the emergency response to these devastating bushfires and the safety of communities and tourists in affected areas,” a Tourism Australia spokesperson tells Marketing.

“As the Australian Government agency responsible for attracting tourists to our country, Tourism Australia will have an important role to play in highlighting that Australia will continue to be a world-leading and safe tourism destination, whether in unaffected regions or those that will recover from these bushfires in the months and years to come.”

“Like all Australians, our sympathies go out to the families and communities who are impacted by the fires, and our gratitude grows stronger by the day for the front line services facing the fires head on,” TA managing director Phillipa Harrison said in a statement on Friday

Within Harrison’s statement, which was made ahead of the announcement that Tourism Australia would be reducing its UK activity, she advised all travellers coming to Australia to “seek the most up-to-date information prior to departure”

“While bushfires continue to impact parts of Australia, many areas are unaffected and most tourism businesses are still open.

“Travellers are also encouraged to speak with local tourism operators and staff at local Visitor Information Centres for advice about local conditions and how best to enjoy their time in Australia.”

Edit: This piece was updated with comments from a Tourism Australia spokesperson directed to Marketing.

Previous Article
UnLtd’s message of thanks to the marketing, media and creative industries
Next Article
A fix for broken customer research – psychology, square pegs and bias