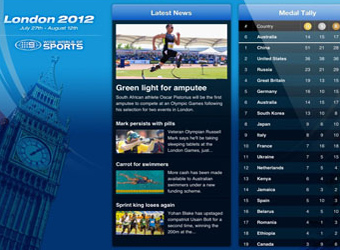 The London Olympic Games was the most successful sporting event ever in terms of online numbers, according to the event’s host of digital content in Australia, ninemsn, which recorded almost 50 million page impressions and six million video streams during the event.

Hosted on Channel Nine’s Wide World of Sports page, the content received an average of 400,000 unique browsers a day, two and half times greater than an average day for the site.

Managing director at ninemsn, Alex Parsons, says the partnership with Channel Nine allowed the site to be the sole provider of catch up online video content for Australia. Catch up content was one of the key ways Australians watched the Games, with 59% of video streams coming from catch up clips.

“With a team of four on the ground in London, we were able to deliver the most up-to-date, behind the scenes coverage on The Games’ site,” Parsons says. “In addition to the more traditional Olympics content, intimate knowledge of what the ninemsn audience enjoy reading and watching allowed our team to uncover some exclusive stories.”

Ninemsn ‘gamified’ its coverage by encouraging fans to compete against each other for cash prizes by earning points for watching videos, sharing links, commenting on stories, playing trivia and rating photos. The initiative resulted in 5500 user sign ups and generated over 127,500 social referrals.

The network’s TV companion iPad app – Jump-in – received an average of 6500 sessions per day. The app is now functioning as a second screen experience for the Today Show, A Current Affair, 11am News and 60 minutes.