Smartphones have whet the appetites of Australians for innovative mobile features such as mobile payments, augmented reality applications and home control, with many displaying high interest in tasks once thought too technical.

The findings, from TNS’ ‘Mobile Life’ study, show that around one in two mobile owners use their phones for social networking, gaming and location-based services, more than one in three for mobile banking and streaming video, and around one in four for music streaming and video calling. In addition, a high number of mobile users indicate interest in using these and other innovative smartphone features.

The hunger for innovation on phones is driven by the utility consumers are realising it can provide, says executive director at TNS, Jonathan Sinton, as the usability barrier of the phone is lowered by increasingly intuitive interface design.

“The beauty of modern phones is there’s no technology barrier,” Sinton says. “They’re incredibly intuitive, and it’s pretty widely acknowledged now that if a two year old can figure out a phone and navigate it, then anyone can.

“So any of these [advanced features] are appealing to Australians if it makes their life easier, or it adds value to their life.”

According to the global study, conducted earlier this year among 48,000 people in 58 countries, 52% of the Australian population now own a smartphone, a figure higher among 16-30 year olds (67%) and men (59%). A further 22% intend to buy one in the next six months, with communication features like email the key drivers behind purchase intent.

Emerging features such as augmented reality, home control, mobile wallet and video are already showing signs of use and rank as some of the most desired feature among those yet to use them. 15% claim to be using augmented reality apps, such as augmented location browser Layar and the CommBank’s Property Guide app, while an additional 21% would like to use the feature. Similarly, 13% claim to be using their phone as a mobile wallet, through services such as CBA’s Kaching, and a further 28% would like to do so, which bodes well for uptake of the feature, despite experts insisting it won’t go mainstream for some time.

Sinton admits that there could be some confusion among respondents over augmented reality and mobile wallet usage, but is not surprised by the findings, given the high level of interest in the features.

Speech to text, video calling and home control via mobile rank as the three most desired features, with 36%, 33% and 32% keen to use them respectively.

Use and desired use of feature among all mobile users 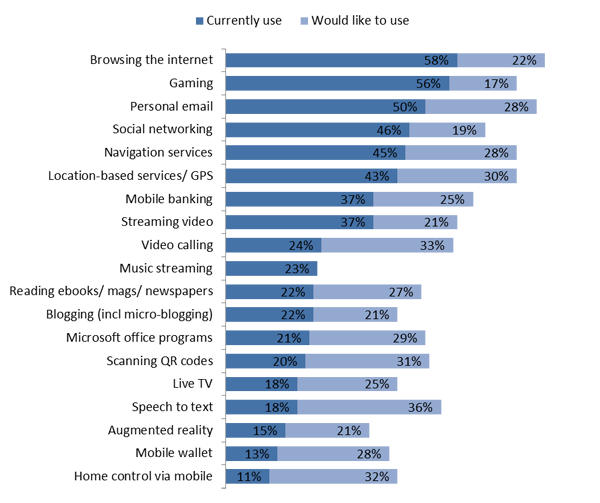 Access of video via mobile phones shows strong momentum, with 37% streaming video and a futher 21% interested in doing so, and 18% watching live TV, with an additional 25% interested in the feature.

Social networking is conducted via mobile by 46% of mobile users currently, a figure higher among smartphone users, 47% of whom access social networks via their phone on a daily basis. The number of people checking in to locations on social networks has risen over the past year, up from 14% to 21%, with a further 15% interested in doing so.

In addition to smartphone users, according to the study, another 13% of Australians use phones that allow access the mobile web, enabling two-thirds of Australia’s mobile market to be digitally connected.

Browsing the mobile web continues to have relevance for all connected users – 58% currently browse the internet by mobile, almost every user with the ability to do so – indicating that map searches and app content are unlikely to take over altogether. With this in mind, Sinton comments that brands need to step up the quality of mobile websites, unless they deal in more habitual interactions with consumers, such as checking the weather, where apps tend to dominate.

“There is still a push to get clients to localise their sites, websites that are not optimised for mobile. There’s so much branding, so much searching, so much information search now happening on either a mobile or a tablet… the market hasn’t caught up with that yet.”

Tags:
Previous Article
Your marketing quote and niche ad option of the day – 16 May 2012
Next Article
Getting your CEO on board