Public transport advertising reaches about 70% of CBD workers in Sydney, Melbourne and Brisbane, including ads inside or on the side of buses, trains, ferries and trams, at stations, on platforms or in shelters.

Roy Morgan has released data on outdoor advertising reach, from single source data for the year to September 2014. Researchers spoke to more than 3000 Australians aged over 14 who work in a CBD.

Almost one in eight employed Australian over age 14 work in a capital city CBD, with an average home-to-work distance of about 18km.

CBD workers in these two cities were also least likely to say they had seen advertising on motorways or freeways – 15.7% in Perth and 14.4% in Adelaide.

Brisbane CBD workers were the most likely to say they’d seen roadside advertising (42.2%).

Brisbane workers are also most likely to report seeing ads on screens in lifts, foyers and offices including reception areas (41.4%). These kind of ads reached 36.6% of CBD workers in Melbourne, 32.5% in Sydney, 26.8% in Perth and 21.2% in Adelaide. 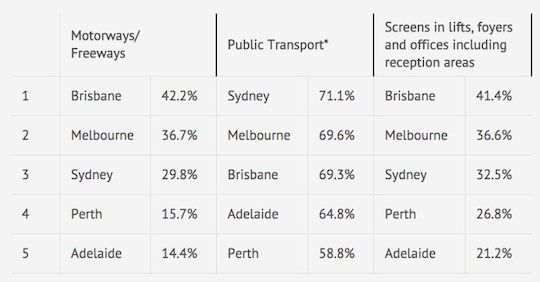 “It is noteworthy that despite the prevalence of an eyes-on-the-phone approach to travelling, public transport advertising continues to reach a large number of CBD workers. That said, we see major opportunities for smartphone advertising to work closely with digital out of home formats, beacons, face/eyeball/image recognition and proximity-based ad targeting services.”