Qantas back in top 10 at World Airline Awards

Qantas back in top 10 at World Airline Awards 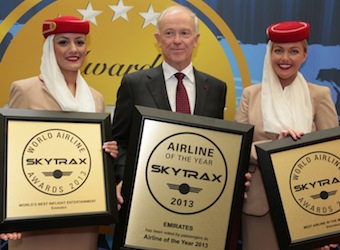 Qantas Airways is back in the top 10 world airlines, and back at number one in the Australia-Pacific rankings, with the results of the Skytrax World Airline Awards for 2013 announced in Paris this week.

In a ceremony taking place at the Paris Air Show, the results of the passenger-voted Awards were announced, with Emirates named the world’s best airline, a significant jump from its placing of number eight at last year’s awards. Qantas came in at number 10.

Even Jetstar picked up an award. It won the title of Australia-Pacific’s best low-cost airline (and second best in the world), beating out AirAsia X, Scoot and Tiger Airways Australia in the local competition.

Qantas, ‘The Spirit of Australians,’ must be breathing a sigh of relief – it has consistently appeared in the top 10 of the rankings, but last year dropped down to number 15.

The World Airline Awards are a global benchmarking tool for passenger satisfaction levels of airlines, conducted through a questionnaire of passengers of all cabin and travel types.