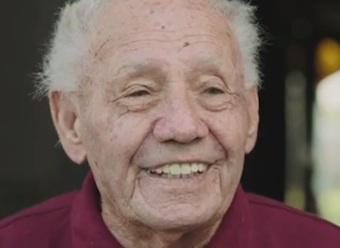 Arnott’s Tim Tam has continued its 50th Anniversary campaign with a suite of celebratory TVCs and online content pieces created by DDB Group Sydney, and a consumer activation from The Zoo Republic.

As part of the 50 year celebrations Tim Tam recently reunited the people of the remote outback town of Winton with their friends and family from Australia and overseas.

On particular story features 85 year old Bert (below) who takes a bicycle ride every morning at dusk with a flash lamp, is in ailing health and hasn’t seen his daughter, who refers to as better than winning the lotto, in years because she lives too far away. His wish was to see her before he leaves this world.

Susanna Polycarpou, marketing director, Arnott’s says, “Australians have loved and connected over Tim Tam biscuits for 50 years and we’re thrilled to be able to celebrate this milestone with a year of togetherness on a large scale. Each element of the integrated campaign, from the reunion in Winton to our advertising campaign, long-form content and on-pack promotion highlight what we believe has allowed the humble biscuit to remain Australia’s favourite chocolate biscuit – its ability to connect all Aussies… in addition to its irresistible chocolate layers of deliciousness of course!”

The TVCs and extended video content, which are now live on-air and rolling out across social media, were developed in conjunction with the activation in Winton.

Kate Sheppard, managing partner DDB Sydney, comments, “Aussies are at the heart of Tim Tam’s on-going success in this country and it was a privilege to be involved in a campaign that brings them together on such a large scale.  This unique opportunity allowed us to capture and create truly touching content that celebrates the landmark birthday, but most importantly celebrates the people who have loved Tim Tam for the last 50 years.”

In line with reunion festivities in Winton, the campaign extends to an on-pack promotion offering “50 trips in 50 days”. Developed and led by brand activation agency The Zoo Republic, the promotion is a collaborative partnership with Qantas and gives Australians the chance to win a Qantas trip to reconnect with friends and family across the world.

CEO at The Zoo Republic, David Lo said, ”Having a birthday party is great, but nothing can compare to the disproportionate happiness created by the appearance of a distant friend or loved one, similar to the joy of sharing Tim Tams bring to families across Australia. This insight made Tim Tam and Qantas natural partners in facilitating this experience in celebration of the brand’s 50th Birthday”.