I recently saw a prototype for the Google self-driving car – its picture is below and looks kinda cute/cool/weird.

Anyone who follows the technology world will know that Google has successfully driven its self-driving cars without incident for more than million miles. But, up until now, the cars have been retro-fitted Toyota and Lexus models – other companies’ cars that Google fitted its self-drive technology to.

This is a big shift in the project’s trajectory. The Google-made car is built from scratch. No steering wheel, brakes or other driver controls. Building from scratch means the self-driving technologies can be engineered exactly where they need to be.

It’s further proof that information, when distributed freely and easily changes the physical world too. That dramatic changes in information have dramatic impacts on all things physical. But what it should remind business people is that we simply can’t know who our competitors are any more. In a world where everyone has access to all the major factors of production we end up with a global demarcation dispute.

It’s non-linear competition, where brands and big businesses get blindsided by category newbies. We’ve already seen it in retail, music and media, and we are about to see it in every form of hardware and manufacturing. The established industries that should, could and would provide the next level of innovation probably won’t. 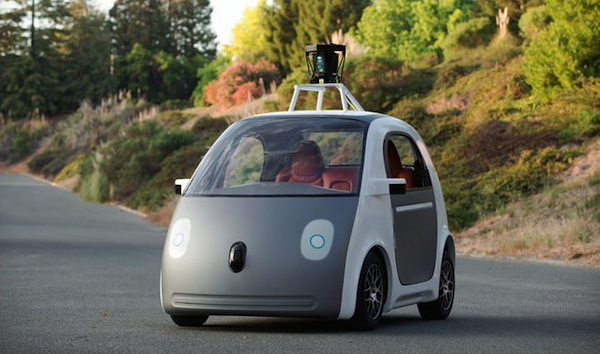 Tesla is already around half the size in market capitalisation of GM and Ford after a few short years in the market. And as we can see by this post the auto industry better get ready for new players from the technology world: Google, and possibly even Apple. The auto industry would do well to remember that cars are about to become mobile lounge rooms, and all the high tech companies are already competing for the ‘lounge room’ in the house.

Next they’ll be competing for the lounge room in transit. A pre-emptive sense of future irony right there. Even small players like Tomcar Australia (which I have an interest in) have proven you don’t need to own a factory to make best in category vehicles and disrupt an established industry base.

I also read yesterday about two absolute powerhouse Australian companies (both in the top 10) Coles and Woolworths, which had better get ready for a new set of competitors. And while they mentioned a siphoning of revenue category by category, I believe they have a much bigger problem coming their way: What to do with 1000-plus stores when no one goes to a grocery store to get their shopping.

And no, this is not like discretionary retail which can be made a social, fun and entertaining experience. Grocery shopping is a chore and technology has a habit of removing chores from the human experience. Not many people run fast or lift heavy things for a living. And mind you, the word ‘computer’ was originally a job title, not a machine.

In the food industry there is a term called ‘share of stomach’. What share the food company got of the stomach – which is the type of measure used to assess the truth about who the competition is, and where the revenue threats lie.

I feel as though every industry needs to develop their own ‘share of stomach’ metric so they can see the real change in their industry. Maybe all industries related to transport need to measure ‘share of human movement’? Self-driving cars aren’t just a competitive play against legacy auto industries – it’s hard to see city car parks being a valid business when we can ‘send our car home to our driveway’ and get it to pick us up later.

It also raises questions about what relatively new businesses like Uber will do when cars don’t need drivers. Chances are they’ll need to become a system which organises and delivers our cars?

Just like life, the real life-threatening diseases are from entities our body hasn’t encountered before and built a natural defence against. At times like these, a tectonic shift, business would do well remember lessons from the natural world.

Previous Article
Why you should pay painstaking attention to the packaging and distribution of content
Next Article
27 years and 10 million members: timeline of Qantas Frequent Flyer loyalty program