It seems we’ve all been a little more influenced by the hit television series Mad Men than first realised. New research from Roy Morgan says that whiskey is becoming increasingly popular among Australians in their 20s and early 30s, causing marketshare shifts among the top whiskey brands.

The show has also been blamed for the increase in sales of the cigarette brand, Lucky Strike, which is featured heavily on the show. Sales of Lucky Strike increased from 23 billion packs in 2007 to 33 billion packets in 2012.

But back to whiskey.

Australians now drink almost 19 million glasses of whiskey in an average four weeks – around three million more glasses than in 2009 – with the average consumption rate fairly steady at just shy of 10 glasses per whiskey drinker. 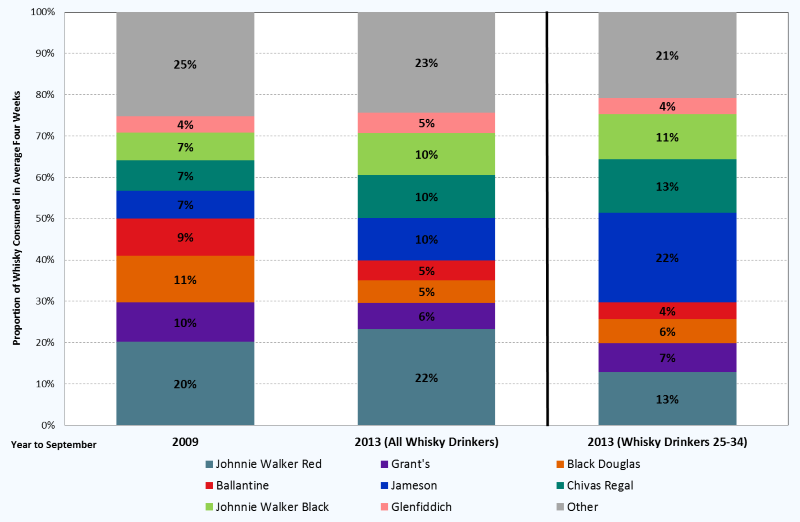 And as whiskey drinking changes, so do the market shares of major brands. Nationally, Johnnie Walker Red is the market leader with 22% ‘share of throat’. Of the 18.7 million glasses of whiskey Australians drink in an average four weeks, almost 4.2 million are Johnnie Walker Red. The market share of Grant’s, Black Douglas and Ballantine have all substantially declined over the past five years and been overtaken in popularity by Jameson, Chivas Regal and Johnnie Walker Black – the latter each now with 10% market share.

But among 25-34 year-old whiskey drinkers, Jameson replaces Johnnie Walker Red as the most popular brand, with the two almost switching market share numbers. In this group, Jameson claims 22% of the market to Johnnie Walker Red’s 13%. In fact, half of all glasses of Jameson poured in an average four weeks are drunk by 25 to 34 year olds.

Johnnie Walker Red’s share in the 25-34 bracket is equal to that of Chivas Regal, and only just ahead of Johnnie Walker Black’s 11% share.

“It is clearly important for liquor distributers and marketers to stay attuned to how the revitalisation and skewing of the whisky market is affecting the market share of major brands.”