In this marketing case study, go inside the process of transforming the University of Western Sydney into Western Sydney University, including the strategy, execution and results of this remarkable rebrand and accompanying ‘Unlimited’ campaign.

On 30 August 2015, the University of Western Sydney rebranded. It was the first identity shift in over a decade. Though the change was subtle, it was bold. The university is now known as Western Sydney University, symbolising the value it has for its community – putting Western Sydney first.

This name change was accompanied by a new visual identity including a new logo, alongside a refreshed brand attitude and voice more relevant to the incoming wave of students and an international audience. The other aim was to address the changing landscape of Western Sydney, which is now the fastest growing part of the country with an amazing amount of investment being poured into the area from infrastructure to innovation and the arts. 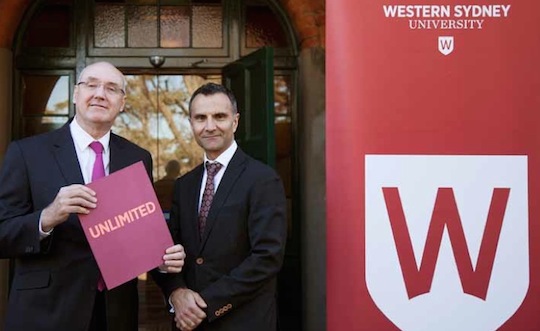 The overall objective for the campaign was to communicate a competitive and sustainable position for Western Sydney University that would attract high performing students – particularly those in the region – to stay in the region where most of Sydney’s future jobs will be. This meant influencing various parts of the community – from the students themselves, to their parents, government, businesses and the media.

With the rebrand launch planned for the university’s annual Open Day, we planned for a pre-launch teaser campaign period in the six weeks beforehand. The success of the brand’s launch campaign was therefore measured in two stages: first, by the impact on visitor numbers to the Open Day (30 August) year on year (YOY), and second, the impact on the number of first preferences for the university (30 September) YOY.

To develop the strategy, extensive research was conducted into perceptions of the Western Sydney area, the outcomes of which served to identify positioning options for the rebrand. What emerged were positive practical values associated with Western Sydney such as ‘hard-working,’ ‘self- motivated,’ ‘non-judgemental’ and ‘streetwise’.

Supported with statistics showcasing that Western Sydney is one of the fastest growing and most dynamic areas in the country, these values led the way for the University’s ‘Unlimited’ campaign, positioning Western Sydney University as Sydney’s most ideally located and progressive university, located in an area renowned for a spirit of determination enabling global perspective and opportunity for its students.

What followed was the development of a communications plan to communicate this perspective, championing the qualities of Western Sydney and amplifying the university’s role in the region.

An integrated through-the-line communications strategy was executed featuring advertising across digital, TV and radio to establish the brand identity, and out-of-home displays in Western Sydney to generate top-of-mind targeted awareness. This was further amplified through PR activity.

The primary target market was high-performing current school leavers residing in Greater Western Sydney and considering undergraduate courses. The university’s mission is to retain these local high achievers who would traditionally have sought out a Sydney metro university.

The secondary target was non-current school leavers residing in Greater Western Sydney considering undergraduate or postgraduate coursework as well as current school leavers with ATARs below 80. This market is targeted to support the university’s mission of being the preferred provider to prospective students in its backyard. 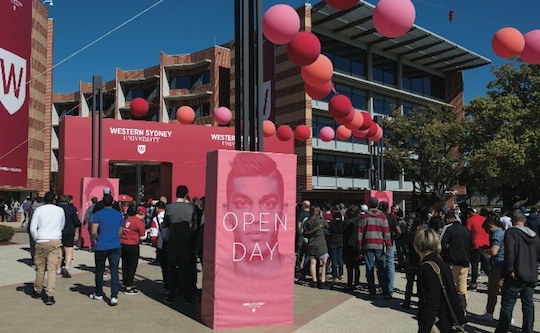 Part of the campaign involved a quasi-rebrand of Western Sydney itself. Six weeks out from the launch of the rebrand, a social media influencer engagement program was initiated. Coined #NewWS (‘New Western Sydney’ and a play on the abbreviated colloquial name of the University – UWS), the activity’s aim was to view Western Sydney through a new lens – a new era for an area that had too long been overlooked.

The campaign reached over four million social media users with 1.6 million impressions made. 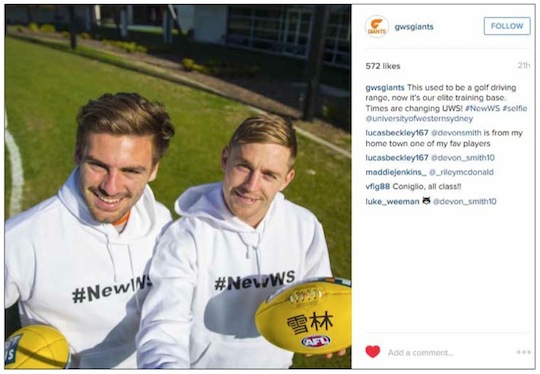 Pre-launch PR activity was initiated ahead of the rebrand, from July 2015. This involved seeding university stories into mainstream media, which spoke to the values that would be highlighted as part of the official rebrand, but also the change that has happened in society, business and with technology that highlights why Western Sydney University is increasingly relevant.

Additional PR activity was called in to play to address rebrand objectors when news of the rebrand leaked during the internal communications phase. A social media movement titled ‘Save the Bird’ was created by some students in an attempt to preserve the then UWS logo (which included an abstract book in the shape of a bird).

A swift social media response, based on a crisis plan that had been architected in advance, connected students who had been consulted along the way with those that were surprised by the change and helped show the organisers behind ‘Save the Bird’ the context for the change.

Media coverage generated from PR around the launch resulted in 149 pieces of coverage in tier one media with 90% of these positive in tone. Notably, there was increased key message penetration.

PR activity continues to be implemented.

A modern Open Day experience was created to launch the new look and feel of the brand with a bang. Most notably were the TEDx-style talks delivered by inspirational, high-profile figures such as Jessica Watson, Waleed Aly and Steve Waugh who align with the ‘Unlimited’ attitude the university instils in its students.

The quality of the Open Day experience resulted in a 128% increase in presentation attendance, while Open Day video content shared on social media over the weekend reached 312,437 people, generating 64,157 views and 1677 likes/shares.

Large-scale advertising commenced to showcase the new look of the university from 30 August 2015 across OOH, TV and digital. The creative was focused on magnifying the ‘Unlimited’ messaging of the campaign, featuring real-life students who are doing remarkable things alongside the word ‘Unlimited’.

Three TVCs also showcased the ‘Unlimited’ stories of alumni who have gone on to succeed on the global stage. Melissa Chiu, a former University of Western Sydney art student is now the director of Washington’s Hirshhorn Museum and Sculpture Garden, and Jay Manly, a former University of Western Sydney engineering student, now an engineering project manager is at Tesla.

The third TVC was another elegant piece of storytelling and went on to attract global media attention. It features the story of alumnus, Deng Adut, a former child soldier in Sudan. After being shot in the back when he was 12 years old, Deng was rescued by the UN and taken to Western Sydney, where at the age of 15 he taught himself to read, before going on to complete a law degree at the University of Western Sydney while living out of his car. Deng is now a refugee lawyer in Western Sydney.

This campaign has been a task of capturing hearts and minds. There was a 27% increase in registrations to the 2015 Open Day, in comparison to 2014. This early stage of the campaign has seen a 4.4% increase in preferences for Western Sydney University year on year, an extremely positive mark of success in contrast with a wider industry downward trend.

Additionally, as a result of the campaign, the university’s social media followings saw an increase with 20% more Twitter followers, 10% more Instagram followers and 1000 new Facebook likes.