Valentine’s Day marketing: The good, the bad and the cringeworthy

Valentine’s Day marketing: The good, the bad and the cringeworthy

It’s no surprise that the ones to nail it on the head this romantic season would be McCann Melbourne, creating a cute little spin-off from their phenomenally successful ‘Dumb Ways To Die’ train-safety campaign.

This is possibly one of the more controversial spots created this year. The 60-second spot created by personal lubricant company Gun Oil has certainly created a lot of chatter around the internet.

At the end of the day it’s a heartwarming commercial promoting a product that, well, I guess doesn’t usually get that much promotional airtime.

“We felt this view of life was a story that was not being told with the authenticity and compassion it deserved,” said Gun Oil’s CEO, Scott Fraser, said in a statement. The spot will air on US channels Bravo and E! in seven major US markets.

Telstra again threw its hat into the ring producing a Valentine’s Day campaign in the first of a series of customer initiatives that forms part of the telco’s new ‘Brilliant Connected Future’ brand marketing program launched on Australia Day.

The ‘Send & See’ campaign was developed in with DDB, and allowed a women the opportunity to send a surprise gift to her husband and watch his reaction unfold as it was captured on glasses equipped with a camera worn by the delivery person.

General Pants hooked up with popular dating app Tinder this week for its Valentine’s day campaign, using the app’s messaging feature to send a push notification inviting users to ‘get in my pants’.

The store is offering 20% to any customer who shows their Tinder profile. The campaign is certainly cheeky, featuring the top of a bare backside in one if its promotional pictures.

What do you think about the retailer asking such a young demographic to ‘get into my pants’? 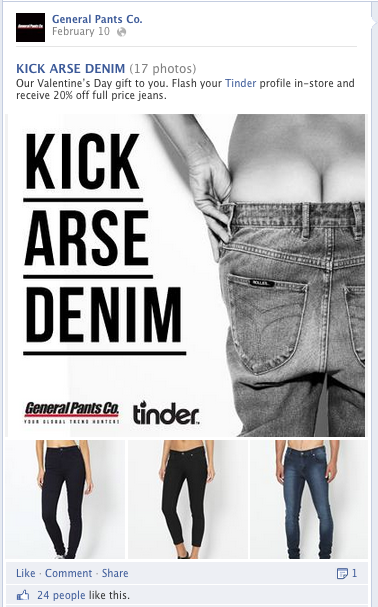 Well good golly gosh. We reported earlier on in the week that IGA had kicked off a social media campaign for Valentine’s Day with a love-themed social response initiative. Implemented through Twitter the activity will surprise customers with personalised love songs for their ‘special someone’.

Through this social mechanic, Twitter users were encouraged to tweet a message for their loved ones using the hashtag #IGAloveSongs and then local musicians will turn selected tweets into succinct, personalised songs which will be housed on Youtube and Vine platforms and tweeted back at the user in video form.

Well here are the results, and they… well take a look for yourself.