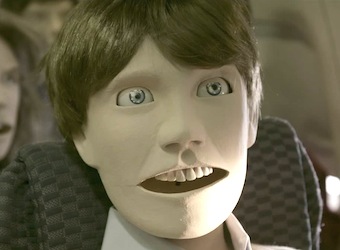 Virgin America is having fun with the online video space. Almost too much fun. Which, ironically, involves releasing the most boring advertisement in the history of video.

The US-based airline Virgin America has released an online video advertisement that runs for five hours and 45 minutes. It’s the most boring – and creepy – online video ever.

But that’s the point. It replicates, in real-time, a flight from Newark to San Francisco – coast to coast – on an airline other than Virgin. It’s an almost brilliant mixture of the tedious reality of the flight with the metaphor of humans on autopilot represented by the mannequins that are the video’s ‘stars’.

Apparently, it was a lot of fun to make. Bryan Houlette, creative director at Eleven, the agency begind the video, told Adweek: “It was never really weird, but rather a challenge to see if we could also make it funny. And in the end, that’s where all the fun happened. It was a nice mix of being really weird and comical, for a real long time. It’s the kind of thing where you want to turn away, but you’re oddly drawn into the boredom.”

The Marketing team has this playing up on a screen in the office. It’s due to finish by late afternoon. Let’s see if we make it to San Francisco.