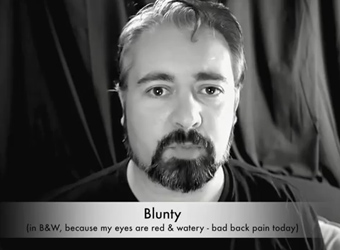 At 11 minutes 24 seconds, you may not want to watch all of this rant in which video blogger Nate ‘Blunty’ Burr, who filmed last week’s Wake Up stunt outside Sydney city’s Apple store, admits to being in on the act.

At 3.25 Blunty admits to signing a non-disclosure agreement with RIM/ BlackBerry and being tipped off on the stunt’s timing, but insists that he was not paid for his involvement. In the video below, he also claims not to have misled viewers of his original video despite suggesting that the stunt might have been guerilla marketing for a new Siri feature and that he was there by coincidence.

“I wasn’t under their thumb, I wasn’t sent out to spread any particular message,” Blunty says in his latest video. “I wasn’t paid, there was no contract involved.The only thing that happened is they came to me and said ‘psssst’ this is going to happen and it might be interesting.”

He also calls the people discussing the stunt, whether referring to the media, public or people who commented on his video, “morons”, “trolls” and “back-biting little bitches”.

The Wake Up campaign lauched on April 22 when the staged protest took place outside of Apple’s George St store in Sydney and continued with online and outdoor executions in Brisbane, Sydney and Melbourne.

A number of news sites and blogs, including Marketing, speculated that Samsung was behind the campaign, given the similarity with their previous campaigns targetting Apple.

On Monday, Samsung denied it was behind the campaign and, on Tuesday, BlackBerry took responsibility, presumably after its hand was forced by the misattribution to Samsung and when Mac Talk discovered code on the countdown site linking it to the brand.

On Wednesday Blunty uploaded the video below.