Want to make a controversial, hypocritical brand decision? At least tell supporters why

Want to make a controversial, hypocritical brand decision? At least tell supporters why

Public perception is brand reality, writes Marketing editor Peter Roper. It’s this fact that explains Zoos SA’s mistake in partnering with Unilever. Regardless of the pros and cons that informed the decision, it’s clear and proactive communication that will (and should have been) the answer.

Zoos SA seriously underestimated the public reaction that would result from its announcement it had partnered with Unilever last week.

The background: Zoos SA runs the Adelaide and Monarto Zoos, which, from now on, will be selling only Streets brand ice-cream to visitors, as well as a corporate sponsorship component. It’s a distribution and marketing deal from Unilever’s point of view, but I won’t go into that here.

The fact that there is such a strong reaction to this move should not be a surprise. The organisation’s core mission is to promote conservation and Unilever’s reputation in environmental circles is poor, to put it mildly. Efforts are being made, with timelines and deliverables (these help) but the perception and cynicism rightly remains.

It gets worse, and the outrage more predictable, when you add in the fact that the contract means the zoo will end its association with locally-owned and operated ice-cream company Golden North (the products of which are palm oil free). South Australia is perhaps the most parochial state in Australia, which could explain why the justification of “Unilever are also corporate supporters of Zoos Victoria, Taronga Zoo and Perth Zoo” didn’t go down so well.

READ: Nestlé is most socially and environmentally-friendly food corporation: Oxfam »

Zoos SA’s campaigns, like those of other wildlife organisations, have often surrounded shrinking orangutan numbers, a major cause of which is the destruction of habitats due to the unsustainable harvesting of palm oil for use in consumer goods (including, according to the WWF: margarines, biscuits, breads, breakfast cereals, instant noodles, shampoos, lipsticks, candles, detergents, chocolates and ice creams).

Unilever, for the record, has committed to source all its palm oil from sustainable sources by 2020. That’s a few years off. But so is the extinction of the orangutan according to wildlife campaigners – such as Zoos SA.

All this adds up to a nightmare for public relations practitioners and community managers, who bare the brunt of the backlash. Hopefully, Zoos SA pre-warned its representatives.

There is no way Zoos SA would have not been aware of what was to greet this announcement. For that reason, my guess is there is a hell of a lot of money changing hands that can go towards its core mission – and transparency around this is my suggestion for where it goes from here (more on that later).

Among the 71 comments currently on the Zoos SA blog post explaining the partnership, 70 are negative. Not just negative, but seething. The reactions on the Adelaide Zoo and Monarto Zoo Facebook Pages are the same.

Here’s a selection of comments:

“This decision is beyond wrong! Who came up with the idea of getting rid of Golden North, with still time on their contract, and with making sure they did everything right by the animals AND the zoo?! And you take a company that ‘might’ do the right thing by 2020,” wrote J Anderson.

“The business that Unilever will get from the zoos is pennies to them; but it’s dollars to Golden North – local dollars that would be better put in the hands of a fine local company producing a fine local product. A company that proudly supports South Australian farmers, and provides sponsorship to a range of local Australian ventures.” wrote user Mark.

“After four years in a row, my family will not be renewing their zoo membership. Unilever is one of the biggest multinationals in the world, what makes Adelaide Zoo think they can change their policies? And why not support local business first? Oh, I guess that would be the multinational dollars you failed to address in the press release,” wrote an anonymous user.

“It’s one thing to make a terrible, terrible decision from both a community (think SA jobs at Golden North) and ethical (palm oil) standpoint, but the magnitude of ZoosSA error is compounded by the aggravating factors of hypocrisy and now spin doctoring. Please, don’t try and placate our anger with your B-grade PR rescue attempt ZoosSA,” wrote user DJW.

The theme of the reaction, and the damage to Zoos SA’s public standing, is two-fold:

One argument is that Zoos SA has chosen profits over principles. I don’t buy this – it is a non-profit organistion, after all, and its profits go back to its mission of providing conservation education. Choosing the company that gives it more money is simply the financially objective choice for right now.

Will this controversy significantly hurt revenue from visitors in the long term? Perhaps. We don’t know how much money Unilever is contributing, so can’t weigh it up ourselves. As with a lot of ‘financially objective’ decisions, damage to credibility and brand goes hand in hand.

The story from Zoos SA

Zoos SA’s official response to the outpouring of anger was to reassert its need for corporate and public dollars. The problem was, its extended justification for the decision only came after criticism reached fever pitch.

“Zoos SA is committed to working with organisations that are making real progress to support sustainable practices and the preservation of the environment and wildlife. This was demonstrated through our partnership with Golden North, who at the time of entering into a partnership with us, were using unsustainable non-certified palm oil. Through our work with Golden North, and their review of their supply chain, Golden North were able to publicly state that they were 100% palm oil free in August of 2012, two years into the partnership with us. This was a great achievement and it has allowed Golden North to market this new status to their current and potential new customers.”

If not intended to simply remind people (at the moment of dumping, no less) that Golden North had made significant, positive changes through the partnership, Zoos SA is implying that this is evidence it can do the same with Unilever.

READ: The 3 pillars of Unilever’s marketing strategy for the connected age »

As the one positive comment out of 71 puts it: “Wow, so many people that have a short-sighted vision and are ultimately not really savvy. This is an absolute win for conservation. The little old Adelaide Zoo has managed to work with one of the world’s biggest food companies and push them to work towards a sustainable future for palm oil.”

“Unilever are also corporate supporters of Zoos Victoria, Taronga Zoo and Perth Zoo with Streets products sold across these zoos. Zoos Victoria, Taronga Zoo and Zoos SA are key drivers of the ‘Don’t Palm Us Off’ campaign, which advocates for the use of sustainable palm oil. As a collective group Australian zoos have immense buying power and are well placed to support positive social advocacy in regards to the use of sustainable palm oil.

“The new agreement between Zoos SA and Unilever includes a number of targets and reporting mechanisms, including an exit clause that will ensure we are able to monitor progress against the commitments made. Should we at any time feel that they have not met these targets, or have moved away from their commitment to buy certified sustainable palm oil from traceable sources, we will be able to terminate the agreement.

Zoos SA’s biggest error was in failing to see (or if not, failing to care about) the damage the move would do to its credibility and brand, regardless of the financial pros and cons of the decision.

But that is not because, as some complaints claimed, visitors are the organisation’s customers. They’re not. The animals are a zoo’s primary responsibility, visitors are a revenue stream, who, like sponsorship, form part of a compromise that environmental organisations must strike to keep revenue flowing to deliver on their mission.

READ: What does Dove’s ‘Real Beauty’ really do? Shine a torch into the attic of Unilever »

Zoos SA made the wrong move, but not because Unilever wasn’t the ‘right’ choice of supplier and sponsor. It was the right choice for the money. It wasn’t for the credibility. For the animals? That’s less clear. Does more money for conservation outweigh a (largely symbolic) stance against a corporation perceived to be exploitative?

Public perception is brand reality, even for an organisation for which the visitor is not the ultimate responsibility. For this reason, next steps should centre around communication. Only through helping members and the community understand the decision that was made will the significant perceptions of hypocrisy and selling-out have any hope of changing. Zoos SA should disclose exactly where and to what degree the partnership with Unilever will benefit its mission. That means project details and dollar amounts.

Another option is to wait it out and hope the controversy will pass. This is risky, unless the organisation doesn’t value brand at all. And, unlike other metropolitan zoos in Australia, Zoos SA is not government owned or operated. Membership holders of Zoos SA didn’t take long to turn the comments section of the organisation’s own blog into a movement to force a special meeting and potentially overturn the decision.

The communication around this partnership hasn’t impressed, especially considering how far in advance those involved could have begun preparing. But the opportunity is still there to turn at least some of the wholly-negative tide in Zoos SA’s favour. 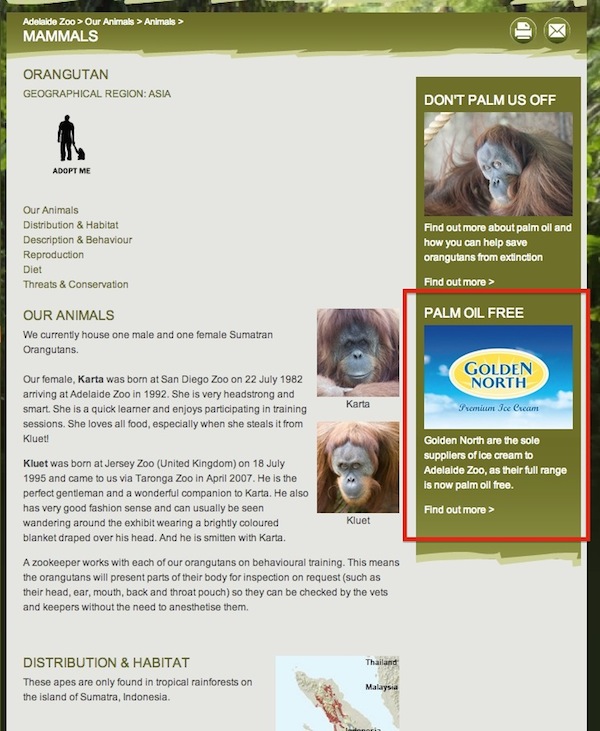 Screenshot taken 11:45am 13 Aug 2014 at http://www.zoossa.com.au/adelaide-zoo/animals-exhibits/animals/mammals?species=Orangutan