‘World is my oyster’ seniors misunderstood by marketers

‘World is my oyster’ seniors misunderstood by marketers 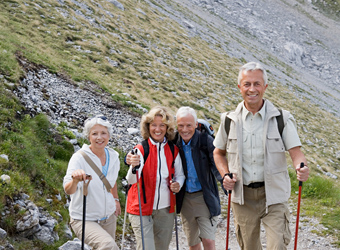 Travel marketers are missing the mark when it comes to communicating with seniors, viewing them as a conservative ‘blue-rinse’ brigade rather than the young at heart, adventurous, and potentially lucrative traveller they’ve become.

Research conducted into the seniors travel market estimates that 4.4 million Australian seniors are active travellers, with more than half of respondents to the study having travelled overseas in the past 12 months and one in five making more than five domestic trips in that period.

With the group holding a disproportionate amount of Australia’s wealth thanks to past housing booms, they represent a missed opportunity, says director of MyTravelResearch, Carolyn Childs, who believes the industry tends to misunderstand how to communicate with them.

“The senior that they’re seeing is not how the senior traveller sees themselves,” Childs says. “There’s a very stereotypical view of this. They may have grey hair in reality but it’s not how they see themselves.”

“They’ll allow you to call them a senior or put grey hair in it if there’s a discount, but if you want more money from them you have to see them the way they see themselves, which is as young at heart, adventurous, still with a lot of living left to do.”

The research, conducted in quarter one of 2012 of over 500 seniors, found that the group often called the ‘grey nomads’ plans to travel more in the future, both at home and overseas. One in three intend to up their domestic travel roster in the next 12 months, with one in seven expecting to take five or more trips at home in the next 12 months.

But they’re also looking to overseas destinations, approaching their spare time with a ‘world is my oyster’ mentality and looking to more adventurous destinations for leisure trips. “They’re not turning their back on the Europes and the North Americas but they’re really looking to get under the skin of destinations and really enrich themselves,” Childs explains, adding that South America is one of their most desired destinations.

Commenting on the type of destinations at the top of their list, one of the participants in the research said, “We would really like to travel to Egypt and Jordan with an organised tour group… we want to see the pyramids, do a Nile cruise, visit sites such as Valley of the Kings, Abu Simbel, Petra and experience cities such as Cairo, Alexandria and Amman.”

Another over-55 year old commented, “Around the world with my wife… Sydney, Tokyo, San Francisco, New York, London, Ireland, London, France, Portugal, Spain, Italy, Switzerland, Denmark and others then Singapore or similar and then home to Sydney.”

“They’ve reached this time in their life where they don’t need to apologise to anyone, they’re spreading their wings,” Childs says. “Broadly speaking they’re free to be spending their money and their time on themselves and suddenly the world is their oysters so they have this immense sense of possibility.”

The group is also turning to online means to plan and research their trip. While they may have been late to the online world, their adoption of digital is strong, with 42% of 45-59 year olds and 25% of those aged 60 or over being smartphone users, 17% of 45-59 year olds and 10% of 60 and overs owning a tablet and both age brackets spending over 18 hours a week online.

Childs will present a workshop on seniors travel in Sydney later in June, revealing findings from the research and tips on how to market to seniors.

Tags:
Previous Article
Nine invites viewers to ‘Jump-in’ to social TV with new app
Next Article
Thriving in the age of digital publishing