Another way of looking at it is that for every person who posts something online or creates online content, there are 99 other people viewing that content but not posting anything themselves.

Either way, it’s a statistic that makes for sobering reading for content creators – especially those who look to use that content as a means of marketing to an audience and, hopefully, to sell something as a result. 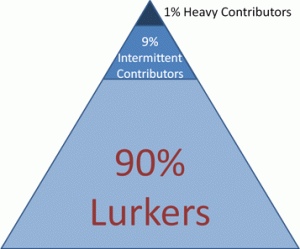 The 1% Rule is not a new concept. Information science has long recognised the Pareto Principle (sometimes known as the ‘80:20 Rule’), which states that 20% of the group will produce 80% of the activity, however that activity may be defined. Management consultants have grown rich on proving that principle to corporations, and devising ways of ensuring a more equal distribution of effort in the name of increased productivity.

The 1% Rule in the social media age

What is interesting, though, is that the 1% Rule has only really gained traction since 2006, placing it firmly in this current golden age of social media. The beauty of social media – and the key reason for its appeal in a marketing context – is that much of the content is user-generated. 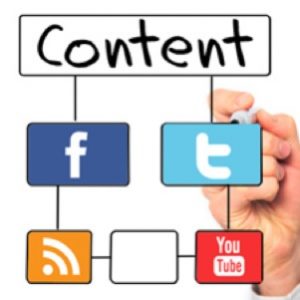 All those Facebook posts, tweets and YouTube uploads are being created by individual users, yet still the vast majority prefer to simply ‘lurk’ – which is the creepy-sounding term given to simply viewing content rather than do anything with it.

If that sounds inconceivable, just consider how the rule applies to social media. One person tweets, several others retweet, but the vast majority simply receive, read and move on. It’s the same with Facebook. Someone has news, others share it – but again, most recipients let it die with them.

And if you want to get really extreme, look at YouTube. Even rarely seen clips invariably have views numbering in excess of 100, while something like the gun-totin’, laptop-shootin’ dad has become a social media/online-content legend. He’s still the individual who created (and shared) the content, others spread the word (including, helpfully in his case, the mainstream media), but 25,973,592 and counting have simply watched it.

So what does all this mean for content providers and, particularly, content marketers? Should we all simply shut up shop because the numbers are clearly telling us that, if we’re lucky, only nine percent of people are actually going to engage with the brand we’re spruiking? As for the other 90 percent, they may get to hear about it, but then it seems they’re ready to move on to the next web page.

Actually, it means quite the opposite. Because thanks to social media, you can be both the one percent who creates the content and the nine percent who shares it, promotes it, tweaks it and uses it for your purposes. Which means your chances of hitting the sweet spot with the 90% of ‘lurkers’ just got a whole lot better. 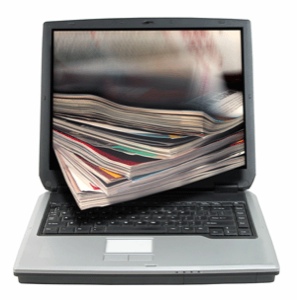 In the glory days of newspapers and magazines, and even television and radio, publishers were both the one percent and the nine percent. They created the content and they distributed it – to newsagents and newsstands, via broadcasting towers etc. Then, the end result was simply readers and viewers. Engagement didn’t come into it. The TV stations couldn’t care less if people were making mad, passionate love with the telly on in the background – as long as it was on their channel.

Although the game has changed now due to the internet and social media creating the possibility for greater engagement, the 1% Rule demonstrates that the majority of people still do not require engagement; that they remain content to simply receive the information. This is great news for companies and content marketers alike.

As with traditional media less than two decades ago, we can both create the content and distribute it – only the channels are different. Instead of newsagents, we can do it ourselves on Facebook. Instead of street vendors shouting ‘Extra! Extra! Read all about it!’, we have Twitter that serves the exact same purpose, only with the potential to reach far more people. And rather than needing a TV channel, we can broadcast ourselves – and our company message – on our own website and YouTube.

Which means we’ve instantly gone from being 1% to 10%, speaking to the 90%. And if we create the content properly and channel it appropriately, we can ensure that it engages those who want to be engaged while still reaching those who simply want to receive it and not necessarily interact with it.

The 1% Rule isn’t a problem for content marketers – it’s a win-win situation.