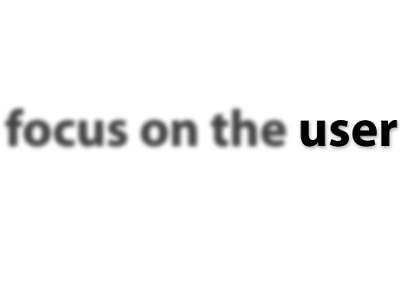 Engineers from Facebook, Twitter and Myspace have responded to Google’s introduction of social search by creating a social search tool of their own.

The rival engineers have shown that Google does in fact have the ability to index search results from other social sources, a capability it failed to include when it launched its new social search feature, Search plus Your World, two weeks ago.

The tool, dubbed ‘Don’t Be Evil’, uses Google’s own relevance measure – the ranking of its organic search results – to determine what social content should appear in the areas where Google+ results are currently hardcoded.

The tool’s website, focusontheuser.org, claims that all of the information comes from Google itself, and all of the ranking decisions are made by Google’s own algorithms, without access to any other APIs.

Consisting of a ‘bookmarklet’ that works in Chrome, Firefox or Safari, the tool changes three parts of Search plus Your World that currently shows information only from Google+:

It was created, as the site says, by engineers at Facebook, Twitter and MySpace, who in turn consulted with other unnamed social networking companies.

As an example of how the tool works, the site shows how social results for the generic search term ‘cooking’ have been manipulated to exclude other social networks.

“When you search for cooking today, Google decides that renowned chef Jamie Oliver is a relevant social result,” the site reads.

“But rather than linking to Jamie’s Twitter profile, which is updated daily, Google links to his Google+ profile, which was last updated nearly two months ago.

“If you search Google for Jamie Oliver directly, his Twitter profile is the first social result that appears. His abandoned Google+ profile doesn’t even appear on the first page of results. When Google’s engineers are allowed to focus purely on relevancy, they get it right.

“So that’s what our bookmarklet does. It looks at the three places where Google only shows Google+ results and then automatically googles Google to see if Google finds a result more relevant than Google+.”

The tool reveals that perhaps Google isn’t as focussed on what’s best for its users as they would have us believe.