Toyota and Captiv8 partnered with passionate social media ambassadors to engage its audience through a video led digital content campaign that reached mobile, tablet and desktop.

Toyota Corolla has been the number one selling car model for two years. For new, young car buyers, however, Corolla was seen as a safe choice.

The challenge from Toyota was simple: to create a campaign that would provide consumers with an emotional connection to the brand and inspire them to think again about the Corolla.

Importantly for the team at Toyota, the campaign was consistent with the overarching brand proposition of ‘A Lifetime of Good Times’.

The new Toyota Corolla was launched with a large above the line TV campaign. The challenge for Captiv8 was to ensure people wanted to engage emotionally and be motivated to act on a digital content campaign. The key insight for this was that people engage with and importantly interact with content they have a natural passion for.

There are untold examples of brand funded video content languishing on YouTube or owned digital channels posted years ago with fewer than 100 views.

When done properly, however, the benefits and overall contribution to marketing and business success can be huge.

There are plenty of opinions and emerging authorities on this, and the truth is there are only a few brands out there that are doing this really well. Importantly, though, this is changing and many of the bigger brands are marching towards putting participation-based strategies at the very heart of their overall marketing.

In developing its video led content campaign, the agency took a people first approach rather than a brand first one.

People engage with and share authentic and meaningful stories, and become inspired by the passion of others. To develop the content, Captiv8 started by researching the passion points that people were searching and sharing across the social web and then ranked the key passion points (food, sport and fashion) to the target audience.

The agency then engaged five high-profile, successful and aspirational Australian ambassadors, all with a clear passion. Importantly, the ambassadors also needed a high social media footprint as part of the strategy to facilitate content seeding and sharing.

Captiv8 also gave people the incentive to submit their own content by offering regular prizes throughout the campaign, including a $20,000 prize. 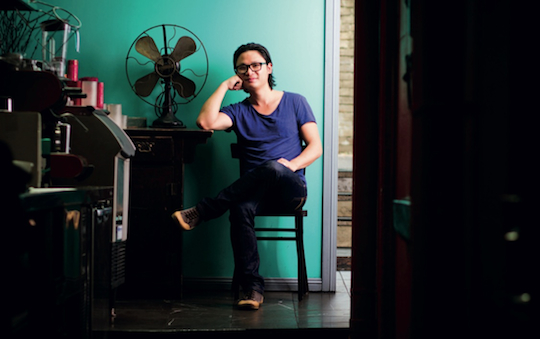 Captiv8 produced a series of beautifully shot short films and content pieces and allowed each of the ambassadors to tell their own authentic story of how they have followed their passion, in their own words. It is this authenticity that contributed to the campaign success.

It was less about product placement and more about real world passion that people could relate to.

The basic access points for the films were simply windows into stories of passion that are relatable to all audiences, not just those interested in that specific field. With an emphasis on character and story, the agency allowed viewers the chance to experience a truly moving personal experience that goes beyond the traditional boundaries of online content and becomes something much more: a genuine emotional connection.

To facilitate the social-by-design approach, the agency developed a hashtag with real meaning – #WHATILOVE. This was used to create continuity for the campaign tying the passions, ambassador stories and user generated content together. It was also used as a means to aggregate user generated content from different social networks (Facebook, Twitter, Instagram) into a purpose built #WHATILOVE online hub.

The consumer journey for the campaign focused on a combination of paid, owned and earned digital channels (across desktop, mobile and tablet). Using Captiv8’s expertise as a content specialist, every piece of content created was designed to be spread through digital social networks, while collaborating closely with Toyota agencies One Green Bean and The Media Store to develop a distribution strategy that provided low barriers for content viewing and sharing.

Captiv8 achieved innovation by seamlessly connecting the dots between brand and consumer without overtly placing the product throughout to achieve higher campaign engagement and social sharing. It developed content that connected with people emotionally, creating multiple passion points along the user journey. This is something that

Toyota had never really done before. By letting the ambassador stories stand on their own, and giving people an emotional context, while creating an authentic and meaningful experience, people naturally engaged more than with any other social campaign Toyota had run in the past.

All of the ambassadors also shared the #WHATILOVE message and their film through their own social media channels. This inspired people to create their own stories sharing with us #WHATI LOVE #Corolla.

This world of content was housed within a dedicated online destination. Captiv8 was able to create content that would live beyond the campaign and the results exceeded all expectations.

It started with a car that moves more Australians than any other model, but finished discovering what moved people’s emotions. And for many their passions ran deep.

As an engagement campaign, the KPIs were video views, user generated content submissions and post likes/shares. The success of the campaign was captured through measurable digital analytics.

The #WHATILOVE hub and YouTube playlist saw over 400,000 views of the short films with a high engagement of almost 60% completion rate on average.

On Facebook we reached over three million people via paid video posts and an average video completion rate of 60%.

We had over 6000 user generated content submissions using the #WHATILOVE hashtag alone and many of the submissions embraced the campaign ethos wholeheartedly.

Social ambassador posts had huge results, with one campaign post by Laura Enever generating more than 11,900 likes on Instagram.

#WHATILOVE was also one of the first campaigns in Australia to utilise native video across Facebook.

The user experience for the content was designed with a device agnostic approach and integrated within the Toyota Discover Content Hub.

The #WHATILOVE hub was built responsive to enable ease of use across mobile, tablet and desktop. It was a destination to seamlessly link the ambassador stories, competition entry and user generated content.

The campaign was also a finalist at the AIMIA (Australian Interactive Multimedia Industry Association) Awards in the ‘Best Digital Advertising or Communication – Automotive’ category. 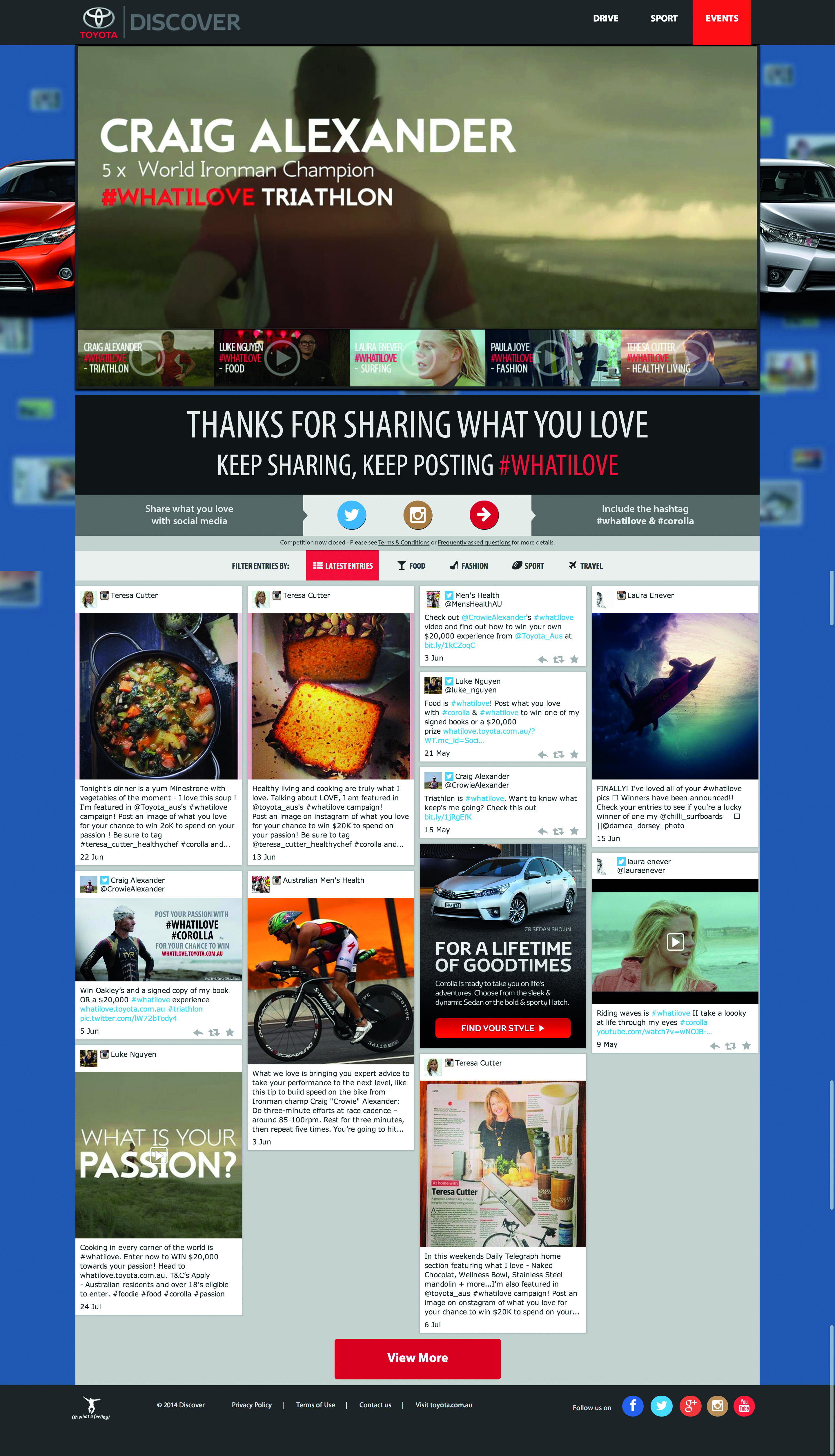 Tags:
Previous Article
Supreme Court rules CarsGuide ads attacking Carsales are misleading, deceptive
Next Article
Why no one cares about your content