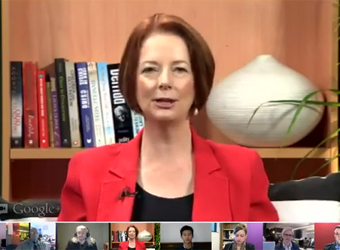 Prime Minister Julia Gillard took to social media to connect with constituents over the weekend, taking part in a Google+ Hangout, but was slammed by the internet community for being “wrong, unjust and immoral” and as domineering as “Chairman Mao”.

While the PM found her first Hangout to her liking, describing it as a great experience and not ‘artificial’, the YouTube community did not feel the same way. While the number of views hasn’t been enabled on the video posted to YouTube, the video had 940 dislikes too only 344 likes at time of publishing.

Online detractors were at work during the Hangout posting heated comments while the Hangout was in session, and the discussion continuing afterwards with one writing “Julia what you ‘feel is right’ is wrong, unjust and immoral” and another comparing Gillard to ‘Chairman Mao’.

If the video below is not displaying correctly, please refresh this page.

According to Google, the collaborative effort between Google+, Deakin University, Fairfax Media and Our Say, was viewed live by around 21,000 users when it aired at 11am on Saturday morning.

The Hangout was the latest effort to promote social network Google+, a goal that fits with government’s drive to connect with voters. Earlier in the year, President Barack Obama used the technology to field questions from Americans in a similar bid for engagement.

Gillard commented that her experience with the Hangout was better than she thought it was going to be. “It’s a great way of getting people to connect. I was worried that the technology was going to get in the way and feel artificial but it actually felt very engaged and like you were getting to know people.”

Google+ continues to slowly increase its reach of the online population in Australia, up from 7% in March to 9% in June, but still suffers from far lower time on site and page views than other social networks, according to Nielsen data.

Questions ranging from men’s mental health to obesity were chosen from questions over 2000 questions lodged on our OurSay.com, with more than 109,000 votes deciding which were the most popular issues to discuss during the Hangout.