Following the success of its iPhone and Android smartphone apps, professional networking site LinkedIn launched its first iPad app, while declaring its intentions to act as a personal assistant for professionals.

LinkedIn’s extension onto Apple’s tablet platform has been executed through an update of its existing app for iPhone, with the single app now compatible with both devices.

The iPad update takes advantage of the device’s multi-touch capabilities and high-resolution ‘retina’ display. The most noticeable feature is a new calendar function, which sync’s with the iPad’s system calendar (with permission) and displays the LinkedIn profiles of people involved in scheduled meetings and appointments.

LinkedIn’s Manish Sharma writes in the company’s blog that the company wants to, through its apps, function as a personal assistant to professionals: “We aspire to be the place where every professional comes throughout the day. A place where members come to gather important business intelligence and insights to be great at what they do.”

Following on from the popularity of the smartphone app, LinkedIn’s mobile team appears to be using insights into its user base intelligently, analysing usage data from the existing app as well as collecting feedback through the LinkedIn Mobile Group on its site.

“We know that our members use their iPads heavily during the morning and evening hours. This ‘coffee and couch’ behaviour is so pronounced that we designed our new app to make every professional feel like they have their own personal assistant,” writes Sharma.

VentureBeat describes it as ‘sexy’. What do you think? 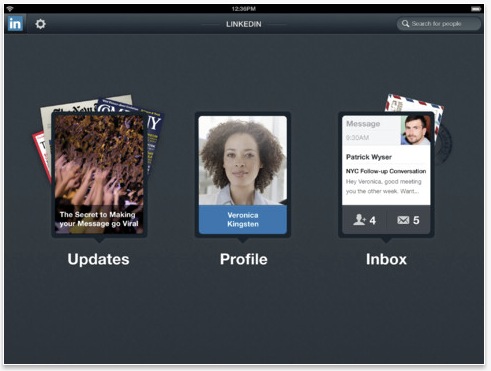 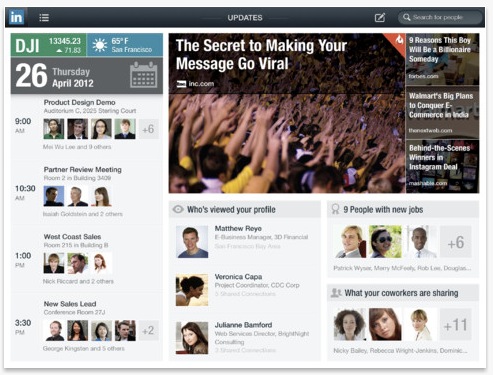 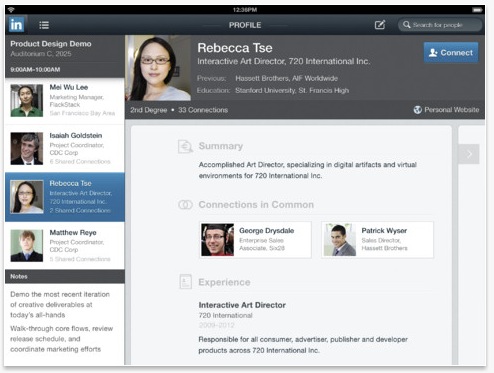