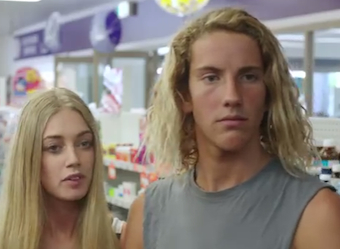 Four Seasons Condoms have partnered with Gary Eck to create a campaign aimed at normalising condom usage with Australian youth and young adults – a generation that is perceived to have forgotten about the safe sex message. The spot is currently being advertised in cinemas and is accompanied by a social media campaign to ask the public whether or not the spot should be shown on TV.

The spots featuring in the campaign have been written and directed by Australian comedian Gary Eck, and are based around the sexual adventures of characters, ‘Raquel and Tyson’.

“The idea behind the ad was to make buying condoms like buying a pair of shoes. If you’re not sure of your size, well, just try one on. Have sex. Make sure it’s fits perfectly. Naked Condoms come in four sizes, so of course our heroes Raquel and Tyson had to try on all them to make sure,” says Eck.

“Our plan now is to take these two down-to-earth characters and continue their journey through a digital content series. They are Four Seasons Naked ambassadors for safe sex and good times,” he says.

Graham Porter, founder and managing director of Four Seasons Condoms, adds,  “We are so pleased with the work that Gary Eck has done on this campaign. This is the start of a new marketing era for Four Seasons condoms as we look to really challenge the likes of Durex and Ansell in what is a very competitive category. The role of content is key to engaging our 16-24 audience and having Gary Eck build the Four Seasons story will provide the audience with some real comedic entertainment, but at the same time ensure that the Four Seasons brand really stands out and that our safe sex message cuts through.”

“The creative was also intended to run on free to air TV as a 30 sec ad, however CAD knocked it back asking for the removal of all sexual references,” he says.

“This is where our digitally focused content marketing strategy becomes even more important. To connect with the younger demographic you need to be irreverent and entertaining and to remove all sexual references in the TV ad defeats the purpose of this entire campaign. The fact is this is a critical safe sex message.”

Tags:
Previous Article
New metric to help advertisers capitalise on Aussies’ changing web use
Next Article
Want to spend all of your Christmas money on yourself? Harvey Nichols has you covered