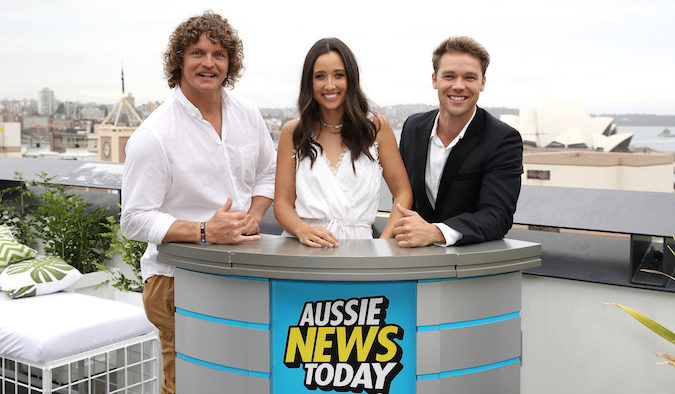 The show will broadcast stories into the news feeds of millions of young people and potential travellers across the world.

Curated ‘by youth for youth’, the campaign aims to highlight unique destinations and experiences available to youth travellers and working holiday makers in Australia.

Aussie News Today will be a socially-led campaign launched by Wallabies rugby union star Nick Cummins, TV presenter Teigan Nash and former Home and Away actor Lincoln Lewis. All three will travel and report from locations around the country.

Additional content will be created as part of a world-first content partnership with BuzzFeed, which will see eight young travellers from Europe sent on a three month road trip around Australia, reporting on their experiences.

Youth travellers represent 25% of international visitor arrivals to Australia and 46% of visitor spend.

“Young travellers and working holiday makers stay longer, disperse more widely throughout our country and ultimately spend more than most other travel segments,” he says.

Content will be shared globally using Tourism Australia’s (TA) digital and social media channels, including dedicated Aussie News Today Facebook and Instagram profiles, and a news hub on Australia.com. It will initially focus on four of Australia’s largest youth markets: the UK, France, Germany and Italy, before being extended to other markets this year.

The $5 million push is the latest chapter in TA’s evolving ‘There’s Nothing Like Australia’ campaign. It has been developed in partnership with creative agency Clemenger BBDO Sydney, media agency UM and PR agency One Green Bean.

“The most successful ideas are the ones that ride a moment in global psyche,” says Ben Coulson, chief creative officer at Clemenger BBDO Sydney.

“We know how overwhelmed people are with a constant stream of bad news and we’re in a unique position, as Australians, to be able to deliver some genuinely good news,” he says.