eBay has employed a segmentation of its users to promote its behavioural targeting abilities using 15 ‘geo-tribes’ or named consumer archetypes for advertisers to target.

With the assistance of RDA Research, the online auction site conducted a geo-demographic and needs-based segmentation so that marketers can target consumers based on characteristics such as socioeconomic status, lifestage and needs.

The rationale behind the segmentation was to bring commonly used offline segmentation approaches to the online world, according to eBay’s head of advertising, JJ Eastwood, an initiative that hasn’t been undertaken before.

“Marketers who are familiar with offline geo-demographical and needs-based segmentation, but have struggled to map them to digital campaigns, now have a tool that brings offline audience segmentation to online advertising,” Eastwood says.

“Ecommerce is now a $30 billion industry here in Australia and marketers are looking for opportunities to connect with consumers while they shop online. Therefore it’s important that as we bring new advertising partners on-board, we connect them with the right audience and in turn our customers receive advertising messages that are both relevant and meaningful to them.” 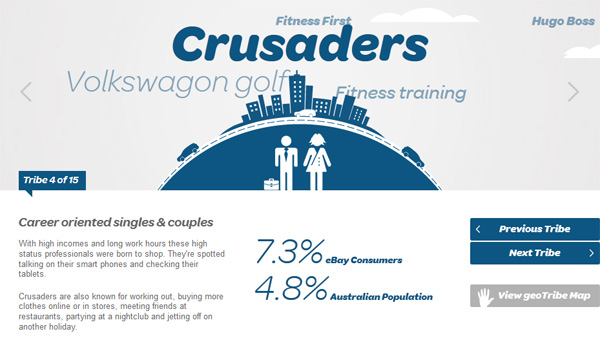 The initiative launched with an educational campaign and microsite to introduce marketers to the geo-tribes, which include:

The microsite incorporates an interactive tool for marketers to generate a free report based on age, gender and geographic location that can be linked to the offline world by allowing marketers to look up where the archetypes are most likely to live.

During an introduction phase, eBay claims to have achieved a four-fold increases in click-through rates and reports from clients of a two-fold increase in return on investment as a result of the geo-tribes targeting.