China is fast overcoming the downshift its media economy experienced in 2013, and cementing its position as a leading global digital media market, according to market intelligence released by PQ Media today. Its already expansive digital media market is expected to increase by an additional 14.9% by the end of 2014, and by 2017 PQ Media predicts digital to account for more than 70% of total media revenues.

China’s media economy – which the report categorises into: ad revenue of digital and traditional media; consumer usage; and, consumer spending on content – experienced a slowing of growth in 2013 compared to previous years, but its 8% overall increase is still faster than the majority of global-leading markets, outpacing 13 of the world’s largest 15 economies.

China’s digital operator revenues and consumer media and tech spending combined to generate US$173 billion in 2013, up 18% year on year, and the report predicts it will continue on an upward spiral for the next decade.

Although China projects a considerably significant presence in the digital media market and is ranked as a leader in global media spent, reports indicate that the average Chinese consumer spends only 4.3 hours a weeks with digital media because they either can’t afford to live near a metro area where digital media and technology are relatively abundant or they are living in more secluded rural areas where access to advanced online and mobile phone services are lacking.

As a result of these restrictions, the number of Chinese consumers without digital service is larger than the total population of 13 of the 15 top global markets profiled by PQ Media. Therefore, while China ranks as one of the largest markets based on digital and alternative media revenues and consumer spending on digital media content technology, it lags most of the developed nations as far as average spent per week with digital media. Even still, digital media usage and overall media spent has grown at double-digit rates for the past five consecutive years.

The drastic overall increase has been attributed to the rapidly growing, technology-conscious middle class, mostly in metro regions, that is gaining frequent access to advanced media services such as broadband internet and the purchasing power to acquire new smart-tech gadgets, digital content and related software and services. According to PQ Media’s ‘China Media and Technology Outlook 2014′ report, Gen Xers and older consumes alone helped propel a 10.7% gain in 2013 in traditional media and technology revenues and spending to US$83.24 billion, driven by higher spending on newspapers and HD television sets.

Concerns over the country’s economy are making Chinese consumers pare spending slightly, with traditional media and technology projected to expand at a slower 9.5% in 2014. Total spending on Chinese media and technology will reach US$256.42 billion in 2013, representing a 15.5% year-on-year gain, although a slight deceleration to 13.2% is forecast in 2014.

The report concludes that, all in all, China’s digital media market is more than likely to tower above all competitors by 2017. 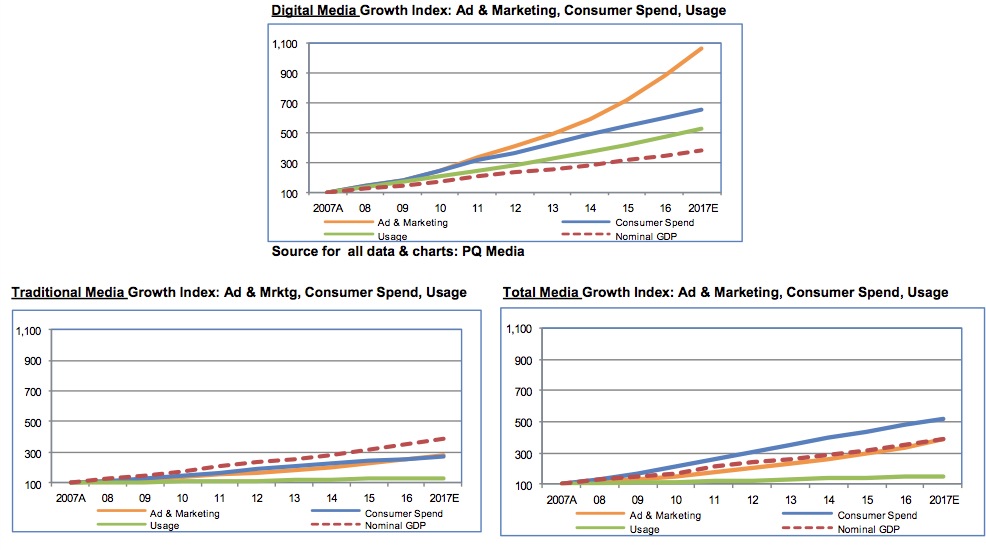