There is enormous interest among advertisers in the potential for 3G and mobile TV. Claudia Sagripanti looks at some of the challenges surrounding mobile TV today.

It’s throwback Thursday! This article originally appeared in the September 2006 issue of Marketing.

Combining the dominance of TV, and the high penetration of mobile phones, mobile TV has created quite a buzz in the advertiser community.

To date in Australia most mobile TV content has simply been ‘clip-based’ TV content. There are examples of some repurposed TV content, which has been ‘tweaked’ for a small screen and a few examples of new ‘made-for-mobile’ content; however, these are the exception rather than the rule in 2006.

Digital services company, Hyro, is seeing interest from brands in mobile TV. According to Chris Flintoft, director of wireless and broadcast at Hyro, “We see the new opportunities in 2006/2007 for advertisers and brands are to sponsor innovative 3G content. People are experimenting, but at this stage there is no commercial model for the sale of ads on mobile phones in the way that there has been for other screen-based media such as TV and online.”

Mobile TV, however, is not just about advertising. Flintoft continues, “Rather than TV-style mobile ads the development of brand immersive events and competitions is where there is a lot of opportunity and interest right now. The chance to generate brand association through word of mouth about hot new concepts is where most brand marketers should be thinking with regard to 3G.”

Content developer and enabler, HWW, is building several mobile TV concepts. Jennifer Wilson, managing director, describes the mobile TV environment thus: “While one mobile carrier considers that the moniker ‘TV’ should only be applied where there is a singular lack of control on the part of the user (and so holding firmly to the existing passive broadcast model even in the face of their own 3G and IPTV developments), other existing TV and mobile network providers see ‘mobile TV’ as offering something more to the consumer than just the same-old, same-old uncontrolled broadcast offering. This embracing of the opportunities presented by the mobile phone will be the foundation upon which mobile TV will float or die.”

Robbee Spadafora, head of interactive TV at the Seven Network, agrees that the carriers will determine the success of the mobile TV. “The caveat is 3G. Currently there are 1.8 million people in Australia with 3G. It’s not a big market to begin with, whether or not they are using voice, text as well as other content services. The telcos [mobile carriers] will be the big driver for 3G uptake. They need to provide an amnesty for trading up phones and encouraging consumption of mobile content in the TV or video sense.”

Any discussion of the future of mobile TV has to address the essential nature of the mobile, and why it is so ubiquitous as a communications and entertainment device. Using the mobile is deeply embedded in daily life. UK research shows that 92% of people cannot get through the day without using their phone (source: The Mobile Life Survey 2006, which interviewed 16,500 adults in the UK). And for 18- to 24-year-olds, their mobile phone matters to them more than television.

This is the environment. Interaction with the mobile is on a deeply personal level. It is intimate communication – immediate, driven by the user, who expects to choose what they want to see and interact with, when they want to. It offers availability. It is the window to a truly mobile world – yet it is a very small window, constrained by the small screen size.

So content and services must work, and work hard in this environment.

While there are a few mobile TV programming concepts already developed overseas, the future will be all about made-for-mobile. In the UK, specialist mobile content developer Endemol Mobile (part of Endemol UK) has developed programs such as Get Close To…, the first show to ever be filmed exclusively for and broadcast on mobile handsets. The show was launched together with mobile carrier O2 and Island Records.

For six weeks, O2 subscribers received Get Close To... the Sugababes every day by receiving behind-the-scenes footage of the girls and sneak peeks into their daily lives. Footage was shot on the Nokia N90 handset. The show is interactive – with a quiz and an ‘Over to You’ section featuring challenges and suggestions posted by the fans – as well as facilitating the creation of mobile communities. Production quality is on a par with broadcast TV; however, the difference is in the interactivity.

Key learnings with major import to the Australian market are funding of original con- tent, and also the marketing of that service. This type of original content is expensive to produce.

Mobile operators are not always in a position to fund production costs. Revenue streams need to be diversified, and consumers educated on its value, and how to use it. As Endemol summarises: “It is so important with this made-for-mobile content to get very, very clever strategic marketing because no one’s used to this content. [Users] have to be told about it, told how to get it, how to interact with it…”

The World Cup Soccer finals provided a testing ground of broadcast to mobile TV services. 3 mobile was the official mobile video provider for the FIFA 2006 World Cup. In Australia, over 800,000 World Cup moments were viewed on mobile phones by customers of 3 mobile, confirms Amanda Hutton, head of music and mobile TV.

A round-up of customer usage in Australia shows:

In the UK, mobile operator 3 recorded more than 3.6 million viewings of its programming. 3’s match highlights channel provided the most popular with 60,000 people tuning in daily. In comparison, the BBC website attracted 399 million impressions for the duration with over five million live streamed games.

However, despite record levels of new media viewing generated by the World Cup, a survey by media agency Starcom in the UK found that content often fell short of consumers’ high expectations of quality and reliability. Only 25% of those surveyed regarded viewing by mobile as a positive experience – compared with 44% for watching on the internet and 63% for interactive TV viewing. Screen size, download speed, picture and sound quality were considered to be the main drawbacks.

Mobile TV on trial in Australia 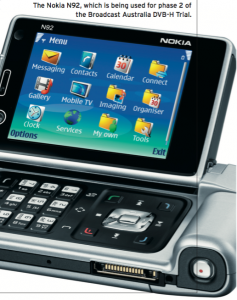 Results from the first mobile TV trial confirmed that the majority of participants are interested in subscribing to a commercial mobile TV service. The trial, the first in Australia, conducted by Broadcast Australia, The Bridge Networks, Telstra, Foxtel, the Nine Network, SMS and Sky Racing, evaluated Digital Video Broadcast – Handheld (DVB-H) technology.

The key finding was that watching TV anytime, anywhere, rated highly with 80% of participants. Overall general entertainment, news and documentaries rated highly, although many noted that they would like to be able to download and record programs to watch later. Sports channels were the most popular, particularly during participants’ lunch breaks and on Saturday evenings. Mobile TV was viewed for an average of 25 minutes per session with one to two sessions per day.

The trial is now moving into the second phase. Broadcast Australia’s broadcast services director, Clive Morton, says, “The [broadcasting] licence has been extended to the end of the calendar year and will run with a better quality, more effective format. We are con- tinuing to work with the content providers to determine what we want to achieve.”

Recent news reports indicate, how- ever, that Telstra has pulled out of the Sydney mobile TV trial phase two with speculation that it will offer services sooner by using MBMS over the existing 3G network.

Trials across Europe have also confirmed that there is a market for mobile TV, but at what price is still a moot point. Sky Mobile TV, with British broadcaster BSkyB and carrier Vodafone UK, has attracted more than 100,000 paying customers since launch nine months ago.

Vodafone’s content development chief, Graeme Ferguson, reported that 50% of 3G customers were opting for the free mobile TV offer for 30 days. “After that two-thirds were staying on as paying customers,” he says.

These results are promising, but is mobile TV the next big thing?

It’s too soon to say. On one hand, the experienced 3G subscriber has an understanding of the concept of mobile TV, likes video and, from the 3 mobile results, wants unique live content and will pay for it. But the rest of the population is still waiting to be convinced on the merits of 3G.

Broadcast technologies are still evolving, and as yet there is no firm business case for either of the competing standards.

There is also potential to be exploited in sending niche content to niche markets, and thereby customise advertising. While this potential is exciting, the business models are not there yet either.

It’s a process of educating users. Serious revenues from mobile TV are possible, but still some time away.

At the time this article went to press in September 2006, Claudia Sagripanti was chair of AIMIA’s Mobile Content Industry Development Group, and director of mobile content strategy company, VentureOne.

For full access to Marketing back issues from 2002 until today, become a Marketing Pro Member. Sign up or learn more. 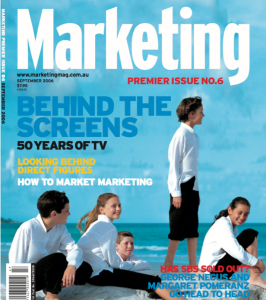