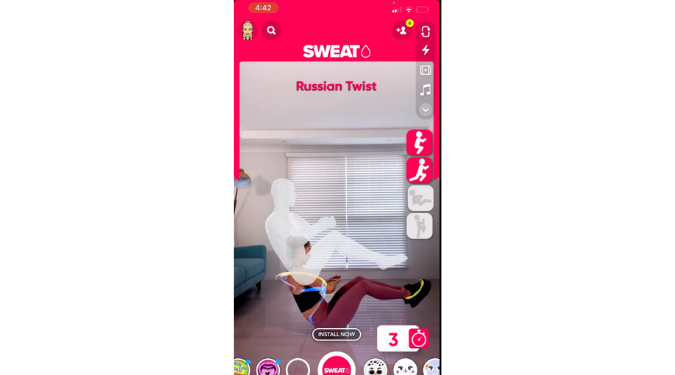 The interactive 3D technology creates an AR experience that moves with your entire body and tracks your body movements while you exercise, supporting users to maintain correct technique and form. According to Snapchat, Sweat is the first local brand to maximise this technology.

“We are excited to see brands such as Sweat utilise the tools that are available on Snapchat. This is certainly an avenue to creatively connect with Snapchatters, adding elements of play and education within the overall advertising experience,” said Kathryn Carter, the general manager for Snapchat in ANZ, SEA and HK.

Itsinses has an Instagram following of 12.7 million users and launched the popular Sweat App in 2015. Within a year of release, it reached #1 in the App Store in more than 142 countries. Meanwhile, Snapchat has spent time focusing on developing innovations related to the mobile camera and lenses, powered by machine learning, having launched ‘Lenses’ in 2017. Today, more than 180 million Snapchat users engage with AR daily to transform the way they look and augment the world around them.

The lenses were developed via an internal version of Snapchat’s AR creation tool ‘Lens Studio’. This allows teams on the platform to iterate and find new, creative use cases and experiences that this technology can power. This partnership encourages users to workout comfortably in their own homes and using technology to motivate people and encourage correct form.

“At Sweat, we are passionate about bringing innovative fitness experiences to women all over the world through digital technology. We are thrilled to partner with Snapchat to offer a fun and interactive way to work up a sweat and celebrate fitness using Snapchat’s latest AR technology,” said Sweat Co-Founder and CEO Tobi Pearce.