As humans, we like to think of ourselves as stable, as having ‘an’ identity. As marketers, it’s necessary to simplify and generalise, in order to do our jobs. But in reality, consumers are fractured, able to hold lots of seemingly incompatible points of view.

GfK Australia’s head of qualitative research, Andrew Therkelsen has been talking to people for the last 15 years about what makes them tick, their interests and what they perceive to value.

Bubbling away in his head lately have been behavioural economics, evolutionary psychology and authenticity, and how they relate to brands.

We had the opportunity to pick Therkelsen’s brain about the contradictory enigma that is the human mind.

Marketing: How can we try and label people, put them into buckets when, really, nobody’s that defined as an individual? 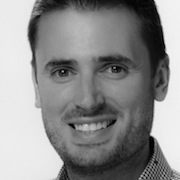 Andrew Therkelsen: There’s this quest to try to get people down to a particular value or a particular point of view when, actually, that’s not compatible with how we are as humans.

I’ve had a lot of great discussions and watched focus groups through the mirror. We try and get an answer out of people most of the time. We’re trying to go through various ways of framing up questions, so that we can try and collect data and look at things differently and get different answers.

Typically, those conversations mean there is a lot of backflipping around, as people would describe what they really think. Whenever I go behind the mirror there are always a couple of clients who are keen to point out how contradictory everybody is being.

Ultimately, that’s what we’re like as people. We do hold all of these different points of view and often they are rationally incompatible.

M: That’s similar to group psychology where people have distinct personalities and play different roles depending on which group they’re in?

AT: Yes, very similar. We are very influenced by other people in that whole herding dynamic because we want to protect ourselves, ultimately.

Often, as marketers, we want to assume there is a very rational decision-making process.

We try to pin them down to this particular way of making that decision but ultimately it’s determined by the context in which you find yourself at that moment, the culture that you’re in, whatever state you find yourself in right at that point can really change the actual final decision that you make.

M: As marketers we have to generalise or we’d never get anything done. How do you then get use out of models of value types?

AT: We use them because they are accurate to a degree, but I think we have to be mindful that there’s a flexibility that we need to apply to those as well.

I think it’s probably just better understanding the touch points. That’s a lot of the work that we do. When you understand the touch points better throughout a customer journey you can understand that there’s actually different people probably in different roles or mindsets at those different points. You can think about them quite flexibly in that sense and tailor your approach and your delivery and your brand message appropriately.

M: It’s interesting that the seven Value Types (below) are globally relevant given that values across cultures vary really widely. Do they change? Is it something that has to be revisited and re-validated?

AT: Yes, they do. Whenever we look at them and try and use them in Australia, there is a lens that you put over them. I think these are the Australian values that we’ve got, even though they’re globally relevant.

Fundamental human needs are cross-cultural. It’s just the expression of them that I think can change slightly. What it means to be an achiever, for example, in China can be different to what it would be in Western culture. Definitely, developing markets versus developed markets have different criteria on which they would judge an achiever, for example, because that’s all about the ways that status and wealth is shown or not.

Where they are on a curve of commercialism, almost, or materialism – I think the most progressive cultures have almost come full circle back through to authenticity. Whereas, if you’re further down the line, it’s probably more about overt status symbols. It’s all still about being able to show to others that you have made it and that’s all about an evolutionary level at the top of the pile, so that you’re most attractive.

M: Do you see changes in Australia at the moment around fitness symbols and wearing brands as kinds of badges, even if your badge is that you don’t wear badges?

AT: Yes, exactly right. There’s this sort moral and spiritual quest that we are on currently that is not about overt status or wealth, but about authenticity. Which I think is a backlash against a society that has been drained of spirituality. Everybody’s sort of an individual and we’re over marketing everything.

Consumers have always been cynical and sceptical about brands and marketing, but that cynicism and scepticism is at new heights. There’s almost nothing you can really put in front of people before they tear it apart for not being authentic.

M: So brands aren’t allowed to display the contradictions that people do.

AT: I suppose we’re almost looking for strength, in that I feel like people look for brands to be strong leaders and are much less prepared for them to be contradictory in the ways that we are. Because I think it points out our own weaknesses.

When brands are unclear or they change or they don’t communicate properly what it is they believe in, it holds a mirror up to us and we want to be clear and have strong morals and strong values. I think there’s a role for brands to play in helping us have them, decide what they are. Provide us with a status.

M: Even if ‘status’ as it has been known isn’t what people are after anymore?

AT: Absolutely, and the quest is a little bit more considered perhaps than it once was. I feel like consumers are really, really suspicious nowadays.

There’s a feeling if I’m really on this quest for the authentic self, then I need to align myself with brands that also have that in their DNA.

That’s opposed to picking out whatever the latest shiny brand symbol is and wearing that. I don’t think it’s quite as simple as that for people anymore, because they’ve been burnt in the past and they’re looking for brands with that deeper longevity connection value.

M: What about with brands trying to force that relationship, whether it’s detergent or a private jet?

AT: Most of the conversations that we’re after with consumers – whether laundry detergent or a technology company or a car – are really about how we are going to connect with you emotionally. I think it’s about knowing where the limits are, where their tolerances are for those connections, because there is a bit of a backlash at the moment. You can easily look like you’re not really in touch with real people and what they want from products and brands.

M: Can you talk through your thoughts around brand relationships mirroring biological activity?

AT: The GfK standardised approach that we have for understanding brands, the Consumer Brand Relationship Model, is based on the 15 relationship types from Susan Fournier at Stanford University. We’ve got some quite sophisticated modelling tools that help us understand the different types of relationships that people have at a human level.

What we do is we can show where you’re at now, how that relationship has developed to this point and then where that relationship needs to go to in order to be most profitable. We know there are certain relationship types that people have with brands that provide more return on investment.

I think there’s something in thinking about brands as people because people do have very strong relationships with companies. It must be something within us that is similar [to a human relationship]. Some sort of chemistry or chemical change in us that makes us feel like it’s either a friend or an enemy. That, therefore, has to be sort of biological.

Fournier takes that chain of thought all the way to its end point. The evolutionary psychologist part fully kicks in for me when you’re interacting with brands and it’s biological. Brands need to very much understand that at a very human level. That is, how we will ultimately forge that emotional connection with people, because it’s a very human thing. It’s not always just a transaction or something at a very superficial level.

M: Does that change the approach brands take?

It is very possible for brands to change their strategy based on a better understanding of the human relationship that they have with their customers.

Seven globally relevant ValueTypes identified by GfK based on its extensive values analysis. 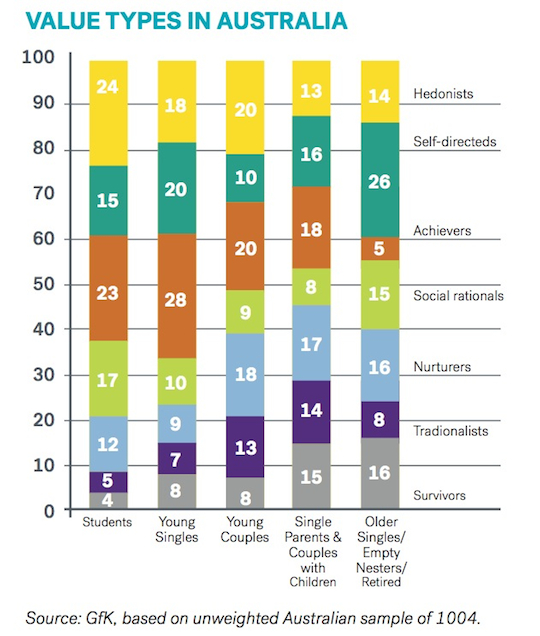 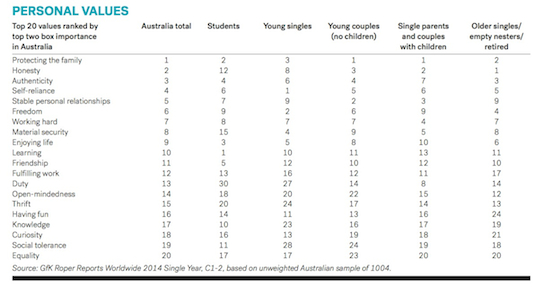