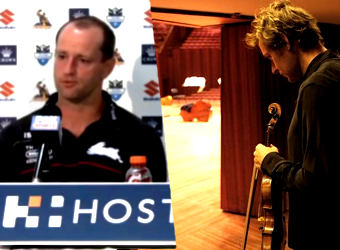 What does the coach of the South Sydney Rabbitohs have in common with the artistic director of the Australian Chamber Orchestra (ACO)? And what relevance do either have to the business world? That was the question many of the attendees at a recent seminar run by agency How to Impact would have been asking.

The answer: more that you would think.

The Sydney-based innovation agency brought the worlds of chamber music and professional rugby league together as ACO artistic director and lead violin, Richard Tognetti AO, and coach of the NRL’s Rabbitohs, Michael Maguire, spoke to audience members about innovation and the pursuit of excellence in high-performance teams. Both leaders are continuing to push boundaries and challenge tradition in their chosen fields.

How to Impact is an innovator in its own right, marrying parallel fields by bringing leaders who pursue excellence in all areas together, revealing that the pursuit of excellence and the desire to drive innovation practises and invigorate people is not limited, and can unite fields that seem to have nothing in common.

Both Maguire and Tognetti say their techniques can be translated to the corporate world as they have gained knowledge and skills from talking to people in all positions and professions, showing that the drive for innovation and excellence transcends any particular workplace.

“There are so many similarities. NRL is like an orchestra, talent is only unleashed as part of a team and everyone needs to put egos aside,” says Tognetti.

Both Tognetti and Maguire have achieved acclaim in their fields, but neither are happy to sit back and enjoy their apparent success, instead believing constant analysis and communication across all fields is essential to continued excellence, success and a strong team culture. This lack of complacency seems to drive the pair, as they agree that you can never achieve complete ‘excellence.’

“What is excellence?” asks Tognetti. “Excellence is a word; we are always on the hunt for it, when do you reach it? We are always trying to get better.”

Pushing the boundaries is not new to Tognetti, who has been named a National Living Treasure and an Officer of the Order of Australia. After being appointed lead violinist and artistic director of the ACO at age 25, Tognetti has helped drive a shift in culture. One of the most immediate and obvious changes he instated was ditching the ‘penguin suits’ in an attempt to make chamber music more accessible.

“What people have in mind, though, when they think of chamber music is a bunch of quite stiff, fairly wealthy white people sitting in rooms in middle Europe.

“And of course it came out of that tradition, it did, you can’t pretend it didn’t, but of course the great thing about music is that you can’t see it and you can’t own it… it lives in the ether. It’s evolved so you could argue that there are rock bands that are playing chamber music as well,” he says.

One of the ACO’s most innovative projects is ‘The Reef’, created in 2012. Here Tognetti combined surf, landscape and music to create a fusion of the two. Tognetti took chamber music away from the traditional confines of a theatre into nature.

“We didn’t even consider it to be chamber music except that chamber music is a definition that has you within four walls, being a chamber and, music, you can do whatever you want so long as you make some kind of sound that emotes… has connection to people on an emotional level,” he says.

“Music is only one part of the adventure,” he says. He says this belief ensures he continues to gain inspiration from all aspects of life, allowing music to break more barriers and affect more people.

In 2005 Tognetti established the ACO’s Education and Emerging Artists program.

For Maguire, the key to success is leading by example. Often coaching young men who are in the spotlight, there is a big margin for area. Maguire says  the players constantly look to him, so he ensures that he is consistent, fair and never complacent.

“In rugby league you will not win a big game or grand final if you have a player that sits anywhere above the team. Individual success comes from the team success.”

With this sentiment Maguire never treats anyone differently. To show this he uses the example of socks – if any player comes to training wearing a different pair of they will be sent back to change.

“We go out to training every day and every now and again a player will wear a different pair of socks. I know you think its only a pair of socks, but why does he need to be different? Ultimately at the end of the day why should he be outside of what the team standards are.”

Managing director of How to Impact, Matt Whale, says the two men show that pressure to perform and the desire to achieve excellence should not stunt a pursuit for innovation and change.

“We set out to explore how these guys do their jobs under extreme pressure without sacrificing the question of innovation. Whether in sport, music or business you have to take risks and we wanted to share inspiration form contrasting worlds of dynamic team performance,” he says.

Whale says the examples of sport and music show that diversity can be an asset, as stepping outside the box and taking inspiration from a variety of areas can help ensure an institution or corporation does not become stagnant and self contained.

“It amazing how many similarities you find. It’s really telling. Learning from and collaborating with high achievers in parallel worlds shows that excellence is something that is contagious, and should be contagious.”

“Everything we do can be applied to the corporate world,” says Maguire. “We are constantly learning and educating each other, we draw inspiration from everywhere and then apply it with discipline.”

Tags:
Previous Article
2013 Shonky Awards: this year’s most dodgy products and services revealed
Next Article
What does your brand stand for?