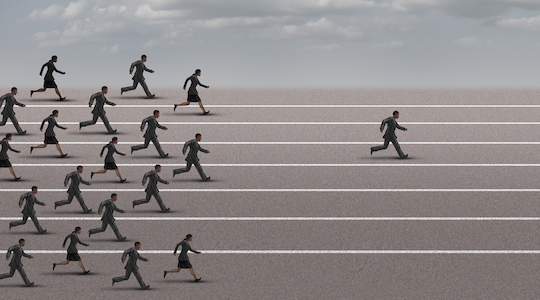 Graham Plant writes that while business would be pretty boring without first movers, the advantage gained is rarely as clear-cut as it seems.

When the theme of this issue of
Marketing was mentioned, there was an obvious choice for me in regards to the topic I would write on: market leaders and first mover advantages… or disadvantages.

As CEO of Effective Measure, I have been privy to the trials and tribulations of a start-up, which has involved being a first mover in emerging markets, being a market leader and also a market follower – but most of all seeing the pain and the glory associated with being a first mover.

The start-up space is one that fascinates me and, after years of playing at the big corporate end of town, I’m enjoying the enthusiasm and drive that comes from working with creative, innovative and passionate people.

While I wasn’t there at the genesis of Effective Measure, the learnings are pretty clear.

Most textbooks will promote that first mover status brings important competitive advantages. Investors the world over are constantly seeking start-ups with such a position, on the premise that early entry into a new industry, market or product category provides a huge head start to a business.

There appears to be a strong belief that the company that leads the way into a new market locks in a competitive advantage that will deliver extraordinary commercial benefits over the long-term. Sure, there are a few companies that validate this theory, but from my research for every academic study proving that first mover advantages exist, there are tomes of references to failures.

The question is posed: is there is a strategic (or commercial) advantage of being a first mover?

Well, let’s apply some anecdotal metrics to the question. Almost half of first movers fail, whereas less than 10% of fast followers fail – so first movers are around five times more likely to fail than a follower. Hmmm…. But that doesn’t really answer the questions does it?

I guess the question needs to be reframed as: do first movers have a distinct advantage over followers that will ensure that they achieve the position of market leader?

The immediate response invoked in my mind is ‘yes’.

Logically, if you are first there has to be an advantage. Right? Let’s explore this further.

If you’re like the majority of businesspeople you are familiar with Microsoft Excel. Ever heard of VisiCalc? What about Lotus 1-2-3?

VisiCalc was the very first spreadsheet application developed for business in the early 1980s. The founders and developers Dan Bricklin and Bob Frankston created VisiCalc for the Apple II and it was further developed to operate on on the IBM PC, Commodore 8032, Radio Shack TRS-80 and a range of HP hand calculators.

Within a year or two after VisiCalc launched, and lauded as a game changer, Lotus introduced Lotus 1-2-3 and quickly passed it as the leading spreadsheet software, eventually even buying VisiCalc. VisiCalc was removed from the market in 1985 – the same year that Microsoft Excel launched.

The market was hot with all the major players having a dip at this market. By 1988 there was a three-way battle for dominance among Lotus 1-2-3, Borland’s Quattro Pro and Microsoft Excel. Enter the power of Microsoft’s interface (itself a close version of a platform developed by Apple), its marketing power and ability to learn from others and improve on others’ ideas. Also, Microsoft did not underestimate the Macintosh market, whereas Lotus did.

VisiCalc had a distinct first mover advantage, but failed to leverage this position. Then Lotus 1-2-3 took the advantage, but again was unable to capitalise on its position through a variety of factors, which allowed Microsoft Excel to capture the status of market leader.

Another example referenced in management textbooks the world over, and still regarded as one of the most successful case studies of the Industrial Revolution, was the birth of the Model T Ford.

Henry Ford is attributed with the famous quote (probably not accurately): “If I’d asked people what they wanted, they would have said a faster horse.” Whether Ford actually said this or not is not important, the point that is worth noting is that being able to see the opportunity even when the customer cannot is key to the success of a first mover.

Ford mass-produced the Model T by harnessing the capability of the Industrial Revolution and automating manufacturing. Ford had a distinct first mover advantage that was so great that he dominated the market and transformed the industry.

However, sustaining that advantage became a challenge due to Ford’s own philosophy of mass production and standardisation. Remember his other quote: “People can have the Model T in any colour – so long as it’s black.”

In the late 1920s Chevrolet took market leadership from Ford by being more innovative and offering options to customers. Ford failed to understand market forces and insisted that all Model Ts be painted black and, as a consequence, it lost the first mover advantage that had been created.

There is no denying that being first can create an advantage, but realising this advantage is an entirely different requirement. Being the first to stake a claim in a new territory or market, or creating a new offer, will undoubtedly create certain advantage, such as setting industry standards, gaining economies of scale and influencing user preferences. But it is not a guarantee of success.

At Effective Measure, the opportunity to be a first mover in the audience measurement space, with a particular focus on emerging markets, and newly accessible digital consumers, was embraced and the business was able to secure strong support and investment. Within a very short time, Effective Measure secured the role as industry currency for digital audience measurement in key emerging markets that included the Middle East, South Africa and Indonesia.

Serial entrepreneur and start-up guy, Scott Julian, who was also the founder of Effective Measure and still sits on the board, makes the analogy: “I like to think of new market opportunities a little like waves that surfers catch. To catch a wave you have to, first, see it coming, second, give yourself the time to start paddling and, third, know how to stand up at the right moment.

“Key to all of these things is timing. If you stuff up your timing on any of these steps, you end up exhausted and having not caught a wave. In business, the way this often plays out is that people latch on to an opportunity either too early or too late, and neither of them will produce the results you are after,” he says.

“If you go too early, you end up paddling like crazy to educate a market, only to see someone else with better timing catch the wave and surf straight past you.”

So in summary, the question that was posed at the start of this article was: do first movers have a distinct advantage over followers that will ensure that they achieve the position of market leader?

First movers into a viable new market definitely have an advantage. While first mover status creates advantage, it does not do so categorically. Much depends on the circumstances, market conditions and capabilities in the business.

Turning the advantage into a successful business requires perfect timing, a clear vision, a sound strategy, sufficient funding, a strong and unified team, customer engagement and the agility to be able to adapt to changes in market conditions.

There are advantages and disadvantages of being a first mover and those brave enough to be a first mover deserve our respect for, without them, life and business would be pretty boring.

Effective Measure is a Marketing content partner, a leading organisations with which we collaborate on content for the magazine and exclusive benefits for Marketing Advantage Members. Visit marketingmag.com.au/advantage.

BY ON 13 April 2016
Graham is founder of Pearl Business Solutions, providing strategic and board advisory services that turn ideas into successful ventures. He works with start-ups launching new businesses, larger companies introducing new products or looking to open new markets, navigating businesses through the martech space or understanding the business value and applications of customer data.