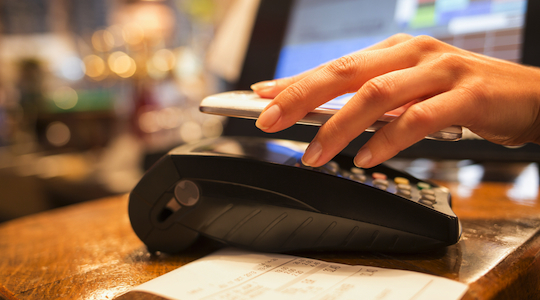 Cade Witnish recently attended the Deloitte TMT predictions dinner, where he was involved in discussions around the findings of the report and future trends and predictions for the year to come. Here are the three that he found most interesting.

Click and collect allows shoppers to buy goods online, then select a location to pick up those goods. The benefit to the shopper is that often they are not home when purchases arrive, as such they can choose to pick up from locations on their commuter route. It’s a win-win for the retailer too. They get to maintain the shopper experience from website/digital asset to the pickup, and if the location is one of their outlets then they have an opportunity to up-sell to customers in store.

The reason I find this so interesting is that the UK is the most mature eCommerce market in the world. With an estimated 500,000 pickup locations set for 2015, predictions are that this will not replace or cannibalise home delivery, but be the primary growth sector for eCommerce. Many of our retail clients are looking for the next thing in eCommerce, and this may be it. We only need to go back as far as ‘daily deal’ sites in Australia to see that we shadow the UK and US closely. We have the benefit of seeing how it rolls out in Europe, and I believe that Australia will follow this emerging trend.

NFC (near-field communication) technology has been in our smartphones for the last four or so years now. The time doesn’t seem to have been right for NFC style payments for myriad reasons: POS tech wasn’t right, people didn’t feel as though it was secure enough, and so on. In the next 12 months, Deloitte is predicting 1000% growth in the number of transactions made on NFC phones, from approximately 2 million in 2014 to between 30 million and 60 million this year. This will account for around 5% to 10% of the total estimated 600M NFC enabled phones.

Why now after four years? Well this is what’s most exciting. The familiarity heuristic around ‘tap and go’ or Paypass cards and the advent of thumbprint scanning functionality for everyday smartphone tasks, combined with the POS hardware that allows Paypass payments, has paved the way for us to adopt this technology. Although in the next 12 months this will coexist with the more familiar payment methods, this is a huge step forward for NFC payments and a likely critical mass to see it take over as ‘the’ payment method within the next five to 10 years.

This trend will create plenty of first mover opportunity over the next few years for L&C’s retail clients.

This is a phrase coined by the people at Deloitte themselves, but interesting nonetheless. This prediction speaks mostly to a restoring of ‘control’ to the CIO’s of big corporations.

In short, since the advent of computers, there has been an enterprise-first approach. Even the PC came first from enterprise development. This balance shifted significantly in around 2005 or 2006 towards a ‘consumer-first’ approach. This consumer-first approach has held strong for the last decade or so, to the point where most large corporations and their CIOs (sometimes reluctantly) have had to change policies toward BYOD (bring your own device) and cloud storage as employees go home to get the latest tech, whereas prior to 2005, employees would go to work to get the latest tech.

Enter 2015 and hardware devices such as drones, wearables (Google Glass etc.), IoT devices and 3D printers have failed to get the consumer cut-through originally predicted. In fact, all of the tech listed above has had much more significant interest from the enterprise sector. This means that their development has been enterprise-first, where they are developed to fit existing business process and are more stringent in their security. This is great news for CIOs as we see a balance restored between employees and companies around technology and its application.

BY ON 9 April 2015
Cade Witnish is managing director of Loud&Clear, a company he grew from a startup of three employees to 45 employees. He is a co-founder of FanHub Media, a Loud&Clear joint venture building the official AFL and NRL fantasy games, AFL Fantasy Punt and the Official NRL Match Centre, and oversees the Loud&Clear Group of joint ventures including BoxSuite, Sidekicker and Designer Websites. Prior to founding Loud&Clear, Cade garnered over 10 years experience in sales and marketing within the pharmaceutical and medical devices industries. Connect with him on cade@loudclear.com.au.

« Iconic and symbolic brands: why Simon Sinek’s golden circle is not an absolute truthIs Foxtel most at risk in the new Game of Screens? »