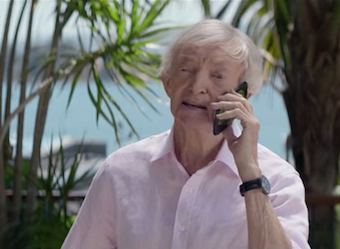 Australia Day is nearly upon us, and brands are getting involved. Here’s a quick round-up of some of the brand activities around the annual event that have caught our attention this year.

SBS critical of lamb ad from Meat and Livestock Australia

The ad shows Benaud phoning notable Australians to invite them over for an Australia Day barbecue. Historical figures Captain Cook, Burke and Wills and Ned Kelly all get a call, as well as former ‘lambassador’ Sam Kekovich and media personality Ita Buttrose.

Although the NITV piece criticising the ad notes that it “at least” features Buttrose, a woman, Indigenous Australians are nowhere to be seen.

“There is so much wrong with this ad, that it’s hard to know where to start,” reporter Danny Teece-Johnson begins, before picking holes in the ad’s portrayal of history.

“But the obvious and painful omission of any reference to the first Australians is another insult in a long run of many.”

On a lighter note, Pizza Hut has created a Vegemite pizza in time for Australia Day.

The Mitey Stuffed Crust Pizza is an option to add a Vegemite and mozzarella cheese stuffed crust to any Pizza Hut pizza for a limited time since 20 January.

That ‘paraphernalia’ includes Australian flag car mirror covers that Woolworths petrol customers can get for free when they buy two packs of Eclipse Mints.

“As well as capitalising on the patriotism of consumers around Australia Day we are also setting a strategic platform for talkability. We expect that the Aussie themed mirror socks will have a dual effect of promoting Australia Day, and also act as a mobile billboard of sorts for Eclipse Mints. People will organically reference the brand to everyone asking about their mirror socks.”

Subscription video-on-demand streaming service Stan has announced it will launch on Australia Day.

Mike Sneesby, CEO of Stan, said: “We know there’s been some speculation around Stan’s launch date, and while we’ve had to keep it under wraps we’re really proud to be able to announce that Australia’s new streaming service will launch on Australia Day.”

Stan will compete with Foxtel and Seven Network’s Presto, as well as the much-anticipated Netflix from the US.

Some of the points Stan is boasting include:

Roy Morgan Research has put together findings on Australian beer drinkers, finding out facts including:

The most popular Australian beers are:

Fans of XXXX Gold, VB, Cascade Premium Light and Crown Lager (but especially the first two) are the most likely beer drinkers to believe that ‘Australian beer is the only beer worth drinking’ and that ‘imported beer is a waste of money’.

These people are also more likely than the average beer drinker to be aged 50 or older, and to spend time at RSL or Leagues clubs playing pokies.

“Our data reveals that people who drink James Squire are much more likely than the average beer drinker to have read a novel in the last three months and self-identify as ‘a bit of an intellectual’, as well as being avid gig-goers and possibly even musicians themselves.”

SBS has been airing a series of news vignettes during the 6.30pm SBS World News bulletin in the lead-up to Australia Day that feature prominent Australians from migrant backgrounds.

This year marks the 10th year that Havaianas will attract swarms of people to beaches across the country to float around on giant blow-up thongs.

Every year, the brand has made world record attempt at the largest amount of giant inflatable Havaianas out on the ocean. This year the challenge will take place at North Bondi, Cottelsoe, Mooloolaba, Glenelg and Torquay beaches.

Urban co-founder and event director, Ryan McDonough, said: “The Havaianas Thong Challenge has earned the title of Australia’s most successful and enduring example of experiential marketing. 10 years on there are not many people you meet who don’t know about or know someone who has participated in the event.”

Here’s a video of the Perth event: