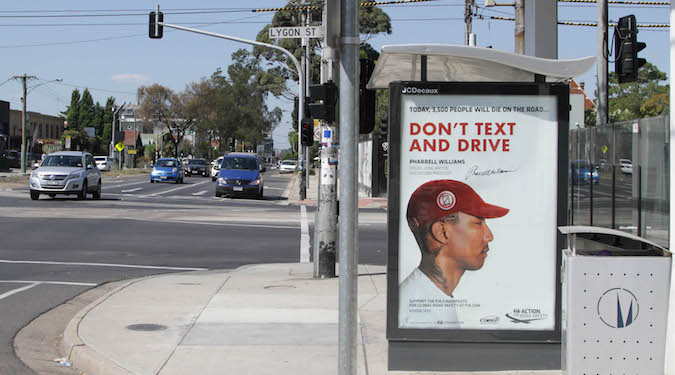 Australia is one of 70 countries to see the #3500LIVES worldwide OOH campaign on road safety.

The campaign has famous ambassadors from around the world including artists Pharrell Williams and Michelle Yeoh, Formula One drivers Fernando Alonso and Felipe Massa and tennis star Rafael Nadal. All ambassadors donated their time for the cause.

Featuring the hashtag #3500 lives, the campaign highlights that 3500 people die in car crashes worldwide daily. This equates to 1.25 million per year. Traffic-related incidents are the number one cause of mortality for 15-29 year-olds, according to JCDecaux’s release.

In Australia, the campaign appears across JCDecaux OOH network in Sydney, Melbourne and Brisbane.

Using the tag line’sign up, stay safe, save lives’, the campaign aims to underline the role that everyone can play to make roads safer for all users.

Members of the public are also invited to sign a 10-point manifesto which calls on governments to make road safety a priority and introduce effective legislation on key risk factors on the road.

The manifesto at a glance:

“Australia is no different when it comes to road safety and the devastating impact road accidents cause with 1209 fatalities in 2015,” says JCDecaux Australia CEO Steve O’Connor.

“Our global campaign will seek to support and amplify any Australian road safety campaigns to spread the message and raise awareness of road rules,” he says.

The FIA represents 245 sport and mobility clubs around the world. “I encourage everyone to promote and share the campaign’s key messages and sign our manifesto for government action. Too many people lose their lives unnecessarily in road crashes daily,” says FIA president Jean Todt.

The #3500LIVES campaign is translated into 30 languages. It is estimated that on the launch, it will be seen one billion times.