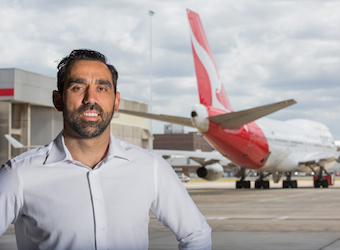 The new partnership will also see Goodes involved in the ‘Recognise Campaign’ – a campaign aimed at working towards a referendum to include Indigenous Australians in the constitution and other programs aimed at strengthening the airline’s relationship with the indigenous community.

In a statement issued this morning Qantas CEO Alan Joyce said he was delighted to welcome Goodes to the Qantas team, “As the national airline, Qantas is committed to promoting cultural diversity and increasing the appreciation of Indigenous culture. We are honoured that Adam, as one of the most respected and prominent Indigenous Australians, will now be working with us towards these goals,” Joyce said.

“With Adam’s help we will increase the engagement with our employees and customers on Indigenous issues. His involvement is a key part of our strategy to create positive change through sports, as well as through education, employment and the performing arts.”

Goodes said he was honoured to be chosen as a Qantas Ambassador: “As a proud Aboriginal man, I’m thrilled to be working with such an iconic Australian brand. Qantas has a longstanding commitment to promoting reconciliation between Aboriginal and Torres Strait Islander people and the broader Australian community,” he said in the announcement this morning.

“I’m really looking forward to being involved with Qantas supporting the work they do with reconciliation. It’s an honour for me to play an active part in engaging the public in the Indigenous program,” he added.

Tags:
Previous Article
What ads will look like on Instagram
Next Article
Media Strategists: be not afraid of programmatic advertising