Adidas vs Nike: Adidas claims victory on back of tactical campaign, sponsorships

Adidas vs Nike: Adidas claims victory on back of tactical campaign, sponsorships 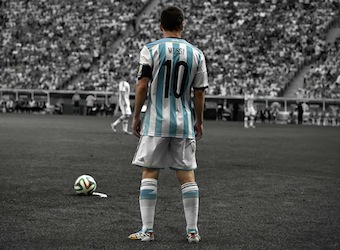 After Nike all but claimed World Cup victory earlier in the week, Adidas has hit back with a combination of blows, talking up its reactive tactical campaign and the fact that it’ll be an all-Adidas final.

Prior to the two semi-final matches this week, Nike touted its performances on and off the pitch, and, as though planned by the sports marketing gods, both semi-finals included one team that wears Nike kits and one that wears Adidas.

In a triumph for the Official Sponsor, both Adidas teams were victorious, meaning that for the first time since 1990, two Adidas-sponsored teams will play in the FIFA World Cup Final.

But in addition to the reflected glory of on-pitch success, Adidas is today also claiming it has achieved its stated goal of being the most talked about brand at the World Cup.

The Adidas campaign, ‘All In Or Nothing’, featuring the hashtag #allin, has been represented across Twitter, YouTube, Facebook, Instagram and Tumblr, with Adidas’ crack social media team posting a combination of planned, anticipated and reactive content for the duration of the five-week event.

The brand reported to Marketing that one outcome has been an increase of 4,865,502 followers across all platforms, more than any other sports brand.

Throughout the World Cup, Adidas has created a real-time tactical campaign focusing on share of voice and reactive moments. The results show that it has the fastest growing community (across sports brands) throughout the tournament, showing a 54.7% (1,962,206 mentions) share of voice across all key platforms in the tournament, 20% higher than the nearest sports brand competitor. This includes 651,720 mentions (33,160 on Wednesday this week) of ‘#allin or nothing’ on Twitter: “More than twice as much than any other brand during the tournament.”

Tom Ramsden, global brand marketing director, Adidas Football, says it’s fantastic to
have two teams in the World Cup Final. “Throughout the tournament our goal has been to
be the most talked about brand of the World Cup and engage with people all over the
world. Having two teams in the final and, of course, Leo Messi, we are in a great position
to tell our #allin or nothing story,” he said in a media statement.

Further reactive and proactive content is planned by Adidas around the World Cup Final.