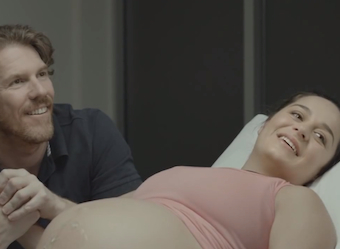 The Advertising Standards Bureau (ASB) has thrown out both complaints an ad by Parents and Friends of Lesbians and Gays (PFLAG), ‘sexualises children’ and ‘promotes gay marriage’.

The advertising board has confirmed both complaints have been dismissed, but says the reasons have not been published.

The spot features a pregnant woman and her partner being told the sex of their unborn baby during an ultrasound. The technician tells the couple they are “having a lesbian”. A meesage at the end of the spot reads, “Any child can be born gay, so marriage equality is every family’s issue.”

The ASB has received numerous complaints about the commercial, with one woman reportedly asking, “If science can prove one is having a lesbian/homosexual should one abort?”

A spokesperson for PFLAG, Shelley Argent, told the Gay News Network the majority of responses to the campaign had been positive and she believed the complaints have come from extremists.

“Our intended message was that any child regardless of sexual orientation should be welcomed into a family and equality is an issue for all parents, was clearly lost by those who objected. As the mother of a gay son, I can tell you that not making a child feel welcome because of their sexual orientation is the real child abuse,” she says.

More than 300,000 people in 195 countries had viewed a related YouTube video.