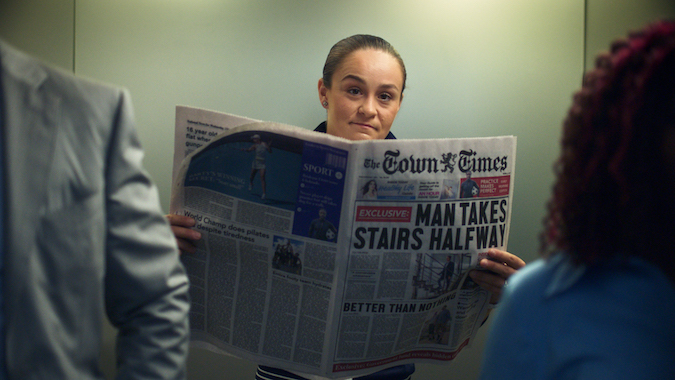 Go big or go home, right? Wrong – at least according to the new ad campaign by AIA Insurance, that is.

At one point or another, we’ve all used the lingering spectre of perfectionism as justification for why we didn’t even bother to try something. Whether it was cooking, writing, or, perhaps most commonly, our health, everyone has fallen into that trap.

AIA’s new campaign, called “All or Something”, seeks to challenge that impulse. It’s message is simple, but true. Small things add up, and it’s better to slowly plug away at a health goal rather than giving in and blowing out.

Featuring Ash Barty and Stephanie Gilmore, the new series of ads centres around the pair of athletes encouraging an average Aussie bloke to choose “something” over “all or nothing” – which all too often results in nothing. The ad depicts the women following the guy around, evidently the living embodiment of his guilty conscience, reminding him that just because he’s getting a chicken parma doesn’t mean he also has to get the greasy chips, or maybe to cut his scrolling short and get an extra half hour of sleep.

The problem with an all or nothing mentality, according to AIA, is that it ultimately isn’t sustainable. You might not be a super-athlete, but isn’t it worth it to be 25 percent healthier?

AIA hopes that by encouraging Australians to form healthier, sustainable habits, Australia can become the healthiest and best protected nation in the world, and envisions this campaign as an integral catalyst in that pursuit.

The campaign, created by Bullfrog Media, will begin with a TV spot, but it’s core element is advertising through OOH, social and digital media. The intent is to “coach” Australians in real time, when they most need it. For example, if you’re stopped at a red light, you might see Stephanie Gilmore staring down at you from a billboard, reminding you to take a few deep breaths while you’re stopped.

It’s not about health kicks or cheat days, it’s about a lasting behavioural shift.”

It’s a bold campaign, but AIA is hoping to shift the conversation around health from “everything” to “something”.