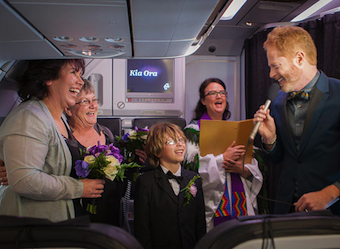 Air New Zealand has celebrated the change to New Zealand’s same-sex marriage laws by facilitating a wedding ceremony 30,000 feet above the ground. Auckland-based couple Lynley Bendall and Ally Wanikau were wed on board a special flight from Queenstown to Auckland.

“It’s been an absolute pleasure to be able to celebrate this historic and joyous moment with Lynley and Ally. Marriage equality is something very dear to both Justin and me,” Ferguson says about the ceremony.

Following the in-flight ceremony a pop-up choir surprised the couple and their guests, performing the Maori love song Pokarekare Ana which was sung in the New Zealand Parliament following the legalisation of same sex marriage in April.

Lynley says the couple has waited a long time to make their 13-year union official and she’s ecstatic to be able to call herself a newlywed. “To be married at 30,000 feet beneath strings of fairy lights with our children, friends and family as witnesses makes an already memorable day that much more special. It was surreal to have Jesse play a part in the ceremony too – we’re big fans of Modern Family!”

Air New Zealand’s chief people officer Lorraine Murphy says the onboard ceremony was an unforgettable way to mark the law change. “The atmosphere onboard was incredibly festive and the applause following the couple’s vows was heartfelt. It was a great celebration of New Zealand’s diversity.”