The Index is the country’s longest running corporate survey and has been produced for the past six years by research consultancy AMR in conjunction with the Reputation Institute. It measures people’s views across seven reputation drivers, and then ranks them according to people’s overall emotional reaction. It is part of a global study conducted each year and uses a method validated by a database of more than three million ratings.

The latest Index shows Air New Zealand has reclaimed its top placing after falling to second in 2015. It previously ranked third in 2013 and first in 2011 and 2012. New Zealanders were particularly impressed with the national flagship carrier’s cheaper flights, new planes, better financial results, positive service experiences and famous safety videos.

RELATED: Toyota is Australia’s most reputable company for 2015 »

It’s the third year running that Toyota and Air New Zealand have made up the top two. Toyota placed first in 2013, second in 2014 and first in 2015, and reportedly only narrowly missed out on line honours this year.

“The long-term reputational success of these two organisations can be attributed to the high quality and innovative products and services for which they are both renowned,” says AMR’s managing director, Oliver Freedman.

“This perception is not new; it has been built over many years through consistent delivery. In the case of Toyota, it has consistently provided mechanically reliable vehicles, and for Air New Zealand, the constantly high level of customer service has been a key reputational driver.”

Retail giant The Warehouse also fared well in this year’s results, moving up one place to rank third overall, driven by strong improvements in its products and services, workplace and the perception of being a responsibly run company.

“The Warehouse is known for its cheap prices but those surveyed pointed to its improved product quality, its upgraded, modernised stores and good treatment of staff as reasons for the rise in reputation,” Freedman says.

Vodafone’s reputation significantly improved in this year’s rankings, moving from 20th last year to ninth overall in 2016. It scored better on all key dimensions, in particular products and services, innovation and governance. Its reputation took a hit between 2014 and 2015, driven by a decline in perception among customers particularly in the area of customer service experience.

Fonterra’s reputation declined. Its overall ranking fell from 17th to 23rd this year. Consumers said ongoing issues with farmgate milk prices were a key driver for its fall in reputation.

Goodman Fielder and SkyCity were not included in this year’s Index as they are no longer in Deloitte’s top 25 companies based on revenue.

The survey was undertaken in February 2016 with a sample of 2911, weighted to age and gender quotas representative of the New Zealand general population aged 18-64.

Here is the full ranking. Click the image to enlarge. 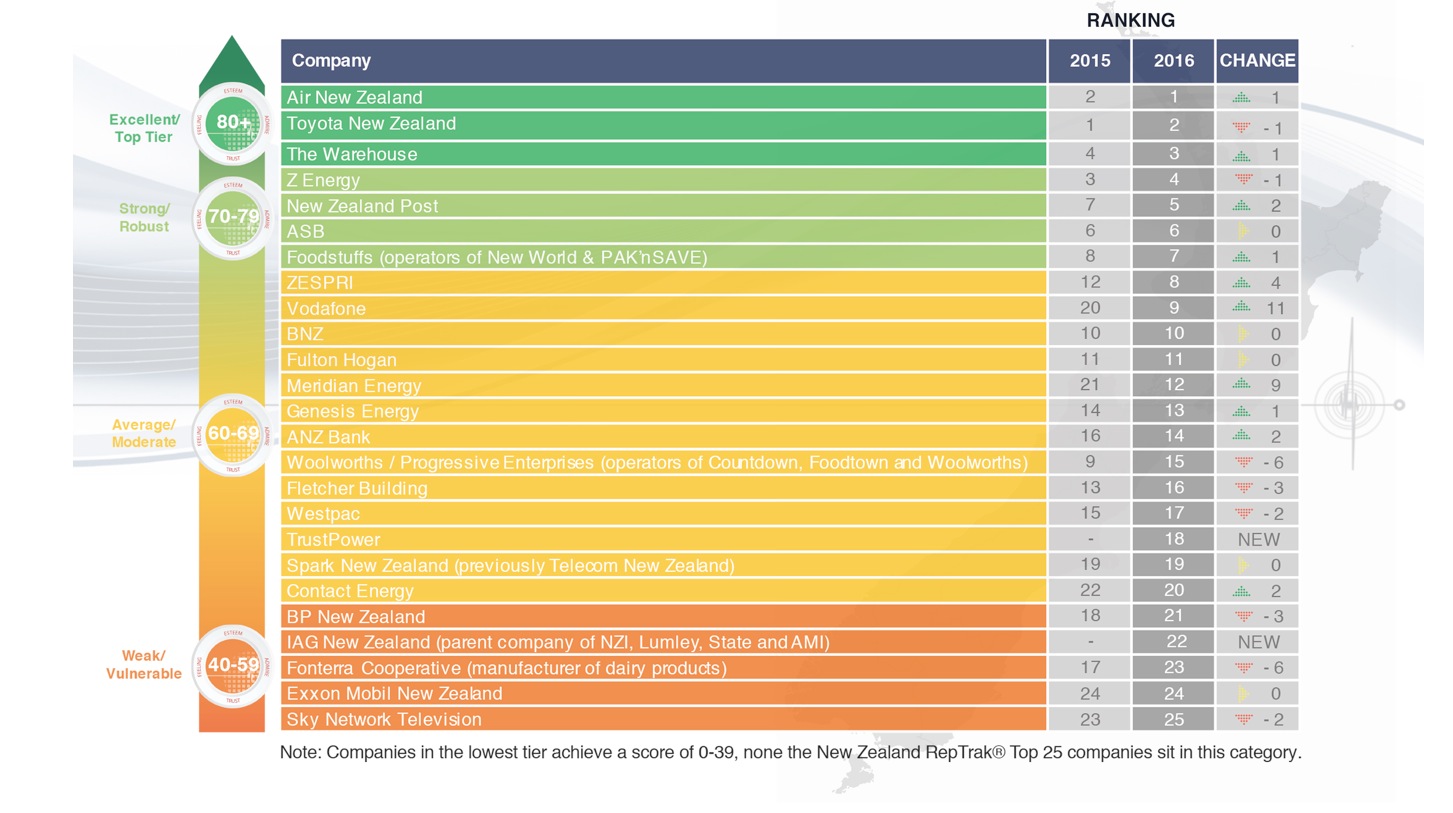