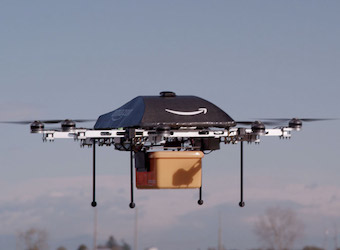 A future reminiscent of The Jetsons could be closer than you think, with Amazon apparently unveiling its plans for a flying drone based delivery service, called Prime Air, to be launched in the US by 2015.

The ‘octocopter’ drones will aim to deliver packages to customers in less than 30 minutes and will be able to carry up to five pounds (2.27 kilograms) of weight, which account for 86% of Amazon’s deliveries. Finding it hard to believe? Watch the video below, released by Amazon, for a demonstration of how the service may work.

Safety is obviously one of the main concerns, Amazon’s CEO Jeff Benzos said, “The hardest challenge in making this happen is demonstrating to the standards of the FAA [Federal Aviation Administration] that this is a safe thing to do. This is years of additional work at this point.”

And that’s not to even mention the limitations of delivery by air. How will the service work in built up cities such as New York where many people don’t have backyards or balconies for the drones to land? And as Extreme Tech commented, what’s to stop people “shooting down packages with air rifles and raiding the loot”?

Aside from all the questions posed, if the service is successful (let’s check back in a few years) it will be a major game-changer for the online retail industry. Clicking the buy button online and having an octocopter delivering your purchase to your door within half an hour seems far fetched now, but could be the norm in five years.

“I know this looks like science fiction – it’s not,” Bezos said. “It will work and it will happen. It’s going to be a lot of fun.”