An ad so nice, they banned it twice: Nissan car ad pulled for second time

An ad so nice, they banned it twice: Nissan car ad pulled for second time 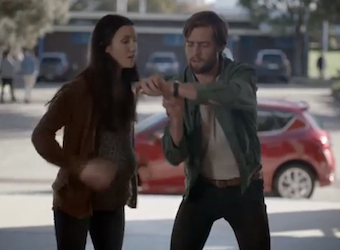 The Advertising Standards Board (ABS) has forced Nissan to pull its latest TV spot not once, but twice, after the car company’s changes following the original complaints were deemed insufficient.

The commercial features a pregnant woman and her partner racing to the hospital. It is then revealed that the woman is wearing a fake baby bump apparatus and the couple are just testing themselves to see how fast they can reach the said destination.

This is one of the few occasions in the history of the ABS that the same ad has effectively been banned twice. The first version of the ad was banned in June after complaints were made to the standards board that the commercial encouraged speeding and dangerous driving.

The ad was edited and relaunched after the complaints, with the scene where the woman was urging her partner to go faster cut out, as well as the engine noise being made quieter. The noise of the brakes when the car pulled up to the hospital were also reduced.

The ad was relaunched on TV and online, but suffered a new round of hits.

Complaints to the ASB included:

“The whole basis of the ad is showing the car hurtling along city roads at great speed with seemingly little regard for its surroundings. The premise is that this erratic or desperate style of driving is to get the pregnant woman, who is in labor, to hospital. The twist is that she is not pregnant – it is a time trial “game” – so the speed is just hooning and demonstrating how fast the car can go. I am appalled that this ad promotes this type of terrible, irresponsible driving as okay. It is clearly not okay – it is dangerous and in surely in breach of Nissan’s responsibility to use responsible driving to advertise their cars.”

You can read the ASB’s findings about the Nissan commercial here.

Nissan doesn’t appear too phased by the second round of complaints. They have decided to switch to a third version of the spot that will still include the race to the hospital, but the “beep” of the stop watch” and the man saying “personal best” are to be removed.

Nissan’s latest version of the ad