Global technology company, Double Robotics wanted to launch its telepresence robot in the Australian and Asian markets, while supporting existing US and UK activity. The device allows a remote user to manoeuvre the robot from the comfort of their home or office and to interact with the world via video and audio devices.

Awareness was low. Where normally this would be considered a disadvantage, the team decided to turn this to their advantage by tapping into the fact that customers had no preconceptions of robots. Therefore, the territory of robots presented a wonderful opportunity to engender the imagination and interest of customers.

Double Robotics briefed Atomic 212° to develop a strategy and execution plan for launching the robot. The team set about developing plans to launch on a low budget with very ambitious targets.

Budget constraints meant that something extraordinary would be required to tell the robot’s story.

The agency was tasked with launching the device into the Australasian market, while supporting existing activity in other markets. Double Robotics had two primary goals:

Double Robotics wanted to launch a campaign across both the B2C and the B2B spaces. Because the brand was new to market, there were no results from previous years to benchmark success.

The agency came into the campaign with two core insights in mind:

Atomic 212° recognised the need to create an engaging story surrounding the robot. The agency needed to ignite the imagination while simultaneously building a story of the robot as a useful, functional… being, if you will. The robot needed a personality. Double Robotics also needed a launch platform that would cost almost nothing to leverage, provide powerful positive mass reach and add value to everyone’s experience. Some would say this was asking the impossible.

This is how the campaign was achieved: Atomic 212° sought out and identified a positive, almost fanatical, world event of such significance that the eyes of both customers and the media would be focused on it.

The agency identified the launch of the iPhone 6s and set about developing an idea to add relevance and entertainment to all those fixated on the event. The goal was to piggy-back on the event in a unique way that made consumers and the media welcome the brand, and the robot, to the event. To add a human element, the campaign focused on Lucy Kelly, the girl behind the device – she was positioned as a young, energetic, innovative young woman who didn’t want to stand in the wind and torrential rain to wait for an iPhone 6s.

The robot – controlled by Lucy – lined for days at Sydney’s Apple store for the global iPhone release, interacting with consumers and media, and was first out the door with a 6s.

The ‘Lucy the Robot’ campaign was born – the humanoid robot was placed outside the George Street Apple store in Sydney to line up for the global release of the iPhone 6s. It sat in the torrential weather for days and interacted constantly with others in the queue, the media and passers-by. On the other end of the device was Lucy Kelly, who controlled it from her home and office. Lucy drove the device from her office to the Apple store and waited in line (via the robot) for two days.

The campaign took the global hype surrounding the iPhone 6s launch, combined it with cool, new technology, then added a human element – it was a recipe for success. Atomic 212° then created compelling content around the story and seeded it across digital.

With Sydney being the first Apple Store to release the iPhone globally, the robot/droid was the first to buy it globally. The simple story was: ‘Robot buys first iPhone 6s in the world’. The story was fun, exciting and exceptionally consumer – and media – engaging.

The campaign was driven by branded content marketing, outreach, search and social media. Once the concept had been developed, the agency targeted a number of mainstream publications like news.com.au or The Australian and television programs like The Project, as well as well-known technology websites like Mashable. It was suspected that if the right media were targeted, there would be a snowball effect where media outlets would end up seeking the story out themselves. Atomic approached digital, print, radio and television sources. This was the most effective way to satisfy the ‘make us famous’ brief.

The secondary phase came immediately after the mainstream phase – the agency used the hype surrounding Lucy the Robot to target specific business titles and programs regarding the practical uses of the device in the workplace.

A microsite was developed to support lead generation and sales, which funnelled sales leads, as well as a number of videos and social media profiles into the sales engine. The search marketing push, which was driven predominantly by search engine optimisation and backlinks, was in support. 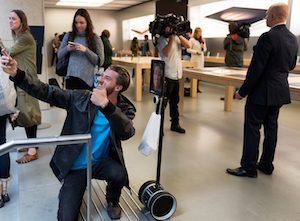 In terms of the reach of the campaign, the story of Lucy the Robot was covered in 4000 pieces across print and broadcast – including The Australian, Gizmodo, BRW, Seven News, Nine News, AFR and Mashable.

Globally, it was translated into 32 languages, reaching approximately 123 million people in total, with an average frequency of seven. This resulted in an estimated media value in the tens of millions of dollars.

All for a marketing outlay of next to nothing.

From a sales and leads perspective, the story, combined with the dedicated microsite, funnelled several thousand sales enquiries, generating millions in sales opportunities.

There were major benefits from a brand perspective as well. Recall in the local market shot up 780%, while brand favourability jumped 1200%.

But, most importantly, the Robot was first out the door of the Apple store. This means the first iPhone 6s sold was bought by a robot.

The results were remarkable by both Australia and global standards and have set new benchmarks for true, genuine viral media campaigns.

Tags:
Previous Article
Data strategy: How to keep it real in the era of technology feast and insight famine
Next Article
What would a four-year-old do? The four great consumer motivators