Google’s Android operating system has overtaken Apple’s iOS as the most owned smartphone platform in Australia for the first time, growing its share of the market by 7% in the past quarter and capturing the hearts of technology early adopters.

Over the past year, Marketing with the help of Kantar WorldPanel’s ComTech data has been tracking smartphone penetration in Australia and the battle between iPhone and Android for operating system supremacy in Australia. Data from the ongoing study of 10,000 Australian mobile phone owners shows that, as of the beginning of July, Android commanded 38% of smartphone market share compared to iOS’ 37%. 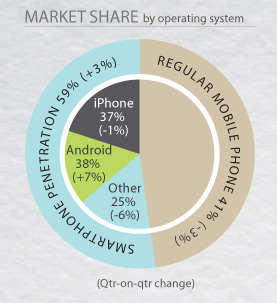 Kantar’s strategic insights director Tamsin Timpson says Android’s surge has been driven by the success of Samsung, the operating system’s range of offers for new smartphone converts and how female orientated and mainstream the iPhone has become.

“It was in contract [post-paid market] where Apple had its stronghold and it’s now lost that,” Timpson explains. “The share for the contract market is now pretty much level between Apple and Samsung.”

In an ironic twist, Timpson believes the iPhone’s popularity may now be working against it, as early adopters looking for less “mainstream” alternatives hone in on Android, just as Apple’s meteoric rise was built on its position as an edgier alternative to Microsoft. “The younger males who are typically the early adopters of new technology want something different now… I think they want to separate themselves from iPhone because it is so mainstream. Android, Samsung and HTC are showing much more strongly in that younger male demographic.”

With three in five (59%) Australians aged over 16 years now smartphone owners, the surge of Android will see developers and marketers begin to place an even heavier emphasis on Android devices. Android’s growth looks set to continue in the absence of a new iPhone release, with the operating system taking in 63.2% of smartphone sales in the four weeks to July 8, compared to iPhone’s 25.8%, (down from 29.9% in March). 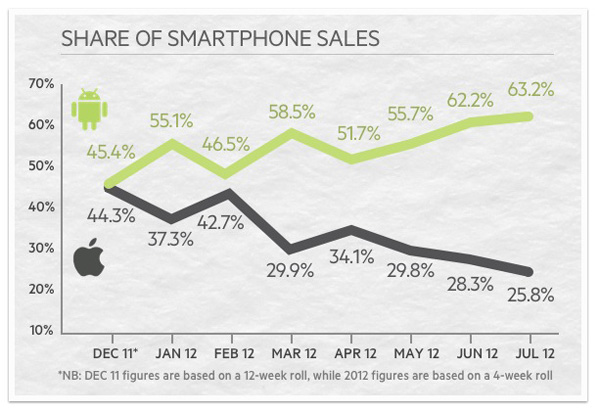 During Apple’s third quarter earnings report on Wednesday morning, CEO Tim Cook and CFO Peter Oppenhiemer blamed consumers holding out for the widely discussed next iPhone release for a global slow down in sales, while hinting at a Spring release for the launch of the handset’s sixth iteration.

“iPhone sales continued to be impacted by rumour and speculation about new products,” Oppenhiemer said. “We’re reading some rumours and speculation [about a] new iPhone and we think this has caused some pause in customers buying.”

True to form, Apple kept quiet about release dates, but Oppenheimer did mention that Apple “could not be more confident in our new product pipeline,” and also mentioned a Spring “transition”. This transition was brought up in the Q&A after the presentation, to which Oppenhiemer replied, “Not something that we’re going to talk about in any level of detail today”.

The “transition” could be the introduction of a smaller iPad or the launch of the next iPhone. MacRumours points out that it will need to take place before the end of September in order for the new release move the dial on next quarter’s figures. Apple also said that it expects a year-over-year increase in Mac, iPad and iPhone sales in September, fuelling speculation of a Spring launch.

According to Timpson partnerships with the carriers could also be impacting on iPhone’s fortunes in Australia, with around two-thirds of new phone buyers in the Australian market classified as ‘upgraders’ who buy new handsets with the same carrier. “Optus is very tied in with Samsung and Telstra with HTC,” Timpson says. “Handset manufacturers need to make sure they’ve got a really strong relationship with their carriers otherwise that carrier is going to push a different brand.”

While the surge in Android handsets represents the first time the operating system has toppled the iPhone for market share in Australia, iOS users continue to user their phone for more tasks than Android users, with 55% using 11 or more non-voice services a month compared to 22% for Android overall. This access to a greater range of content and apps is borne out at the advanced handset level also with only 33% of Samsung’s Galaxy S II owners and 35% of S III models being heavy users of non-voice services.

Timpson predicts that Apple will hit back, but much will depend on how the sixth-generation iPhone is received when launched later in the year.