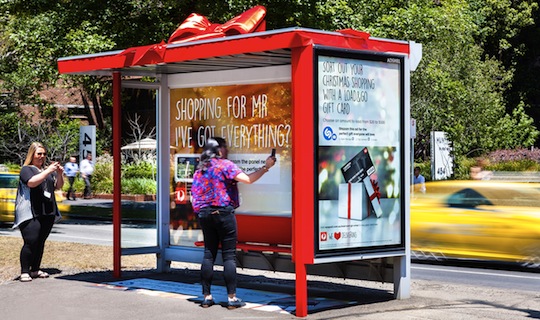 “Adshel provided a platform for us to integrate the interactive Shazam messaging allowing consumers to purchase a Load & Go card immediately, capitalising on the limited downtime consumers have in the lead-up to Christmas”

The bus shelter campaign will run until 13 December.

AustPost partnership with 1688.com opens Australia for business with China

1688.com, the Chinese B2B online marketplace, was established in 2010 by the Alibaba Group to help foreign businesses sell their goods in China at wholesale prices.

The first businesses to operate via the website’s new ‘Australian Pavilion’ will be five Margaret River wineries – EVOI, Flametree, Happs, Laurence and Rosily – in response to high demand for Australian wine in China.

“The 1688.com Australian Pavilion is the culmination of many years of work to solve a major obstacle for the Australian wine industry, offering a simple avenue to sell and ship to China in bulk”.

Over the coming months, Australia Post will be working with other Australian wineries to broaden the range offered on the site, with the intention to expand to other products and services going forward.

RELATED: How Jacob’s Creek is positioning itself in the booming China wine market»