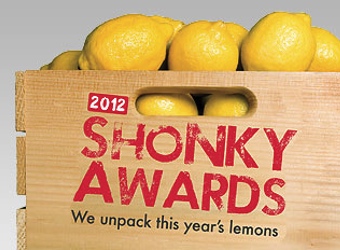 Congratulations are in order… to Australia’s dodgiest brands!

Choice, “the people’s watchdog”, has revealed the ‘winners’ of the 2012 Shonky Awards, ‘celebrating’ Australia’s “shonkiest products and shoddiest services” from companies making misleading claims, engaging in false advertising, showing a lack of transparency, or dealing in faulty goods or poor service.

‘Worst in Show’ is being put to popular vote from the eight winners of this year’s Shonky Awards:

Choice has tested 170 washing machines over the last six years, but using 224 litres of water to wash 3.5 kilograms of clothing earned the Samsung SW70SP a score of 0% for water efficiency, made even worse by the fact the washing performance also isn’t great (although the rinse function is apparently top notch).

Billed as an invisible nanotechnology coating for phones and other mobile devices, Choice says, “After sending four iPhones to a watery grave, it was apparent that the Liquipel claims, unlike the Liquipelled gadgets, don’t hold water, making the $99 service a false reassurance and a complete waste of money. The only iPhone to survive was a ‘control’ phone that wasn’t Liquipelled!”

Choice’s investigation of bathroom mould killers found these Shonky ‘winners’ do little more than bleach the surfaces it’s applied to. Even worse, “the bleach can actually erode and corrode grout and tiles, making them more porous – and more receptive to future mould festivities.”

Australia’s ticketing duopoly scored a prize in this year’s Shonkies for the abundant extra fees and charges – including service/delivery fees even if you print the tickets yourself.

Charging a 10% credit card surcharge for every trip earned a Shonky Award for Cabcharge, the company that powers the payment processing technology in taxis. (Cabcharge denies it’s a surcharge, preferring to call it a ‘financial services fee’).

Choice says the harm in homeopathic ‘medicines’ is not in the stuff itself, but the parents’ mistaken belief they’re helping their sick children: “The idea of selling water for upwards of $1000 per litre and claiming it’s medicine represents the very essence of shonkiness. But convincing anxious or desperate parents they can use it to treat their children’s ailments takes it to a whole new level.”

Claiming a 15-segment chocolate bar contains 16 serves was enough to earn Toblerone a place in Shonky history, with the pain person number 16 must feel at the party too much to turn a blind eye.

Tags:
Previous Article
Apple losing its grip on mobile market: InMobi
Next Article
Buy a new pair of Nikes by running in your current ones