For its new range of condoms, SKYN, Ansell has launched a campaign which calls on Spotify users to create a sex songs playlists.

Digital communications agency Rodeo is behind the ‘SKYN the Mix’ campaign which invites users to vote for their favourite ‘sexy songs’ and create their own intimate playlist to share with friends, or that special someone.

The campaign is designed to communicate a message that can be considered taboo, in a fun and relaxed environment, while helping to get people in the mood, according to Rodeo.

General manager of Rodeo, Aaron Tobin, adds, “SKYN the Mix is a fun, light-hearted way for people to engage with a product that is still considered fairly taboo. It allows people to be cheeky and adventurous, without feeling embarrassed, by tapping into the popular pastime of making and mixing music.”

Sales and marketing director for Ansell, Nicole Hillier, says, “The SKYN the Mix campaign allows consumers to engage with the SKYN brand in a relaxed environment. Importantly, the music context and partnership with Spotify makes it easy for our audience to share the campaign through social channels and associate the brand with something they love, music.”

The campaign will be executed with a microsite, developed Facebook integration and media partnership with Spotify.

Early leaders in the voting include Barry White, Marvin Gay and Chris Isaak. 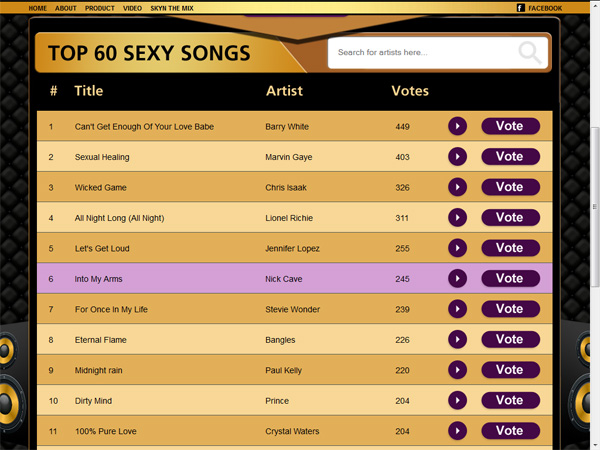